The possible participation of Álvaro Noboa in the 2021 presidential elections generates reactions among political organizations , whose binomials have already been qualified by the National Electoral Council (CNE). 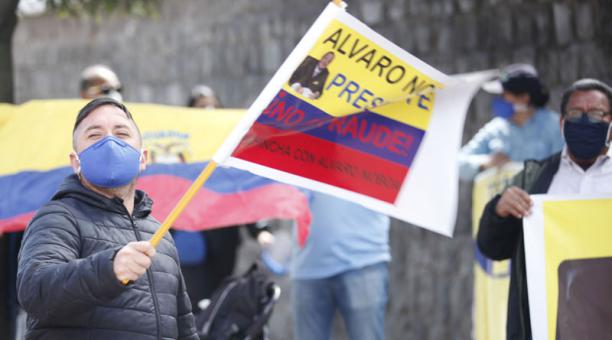 Creo and the Social Christian Party (PSC) challenged the resolution that granted deadlines for the primary elections of the Social Justice movement , a group that announced its support for the banana businessman. But an eventual presidential candidacy of Noboa, to which candidates would he dispute the votes?

Political analyst Simón Pachano explained that up to now the five-time presidential candidate would enter a competition with populist candidates. “He is a candidate who can take votes from one or the other, not necessarily just one.”

He specified that Noboa can be placed in a right – wing ideology due to his economic proposal , but his partisan style is populist , so he considered that he will enter, mainly, to lobby votes not only for Guillermo Lasso (Creo-PSC), but also for Andrés Arauz (Unes).

Noboa had already announced last July his intention to run in the elections with his Adelante Ecuatoriano Adelante party . A month later, he discarded his application so that “a single force against evil” could unite in reference to correísmo. Later his organization was eliminated by the CNE.

Felipe Burbano de Lara , a political analyst, indicated that the votes that Noboa manages to snatch from his populist opponents will depend on his ability to reinvent himself . “The last election in which he participated, in 2013, was extremely poor, it reached 3% and thus he does not get votes from anyone.”

The political consultant Oswaldo Moreno affirmed that the change of decision in the Guayaquil politician generates doubts because in July his name rang out with force and had an exponential growth. Now, he said, there will be a reaction from the electorate once his nomination is qualified or not.

However, he explained that in the case of Álvaro Noboa there would be a projection of “anti-system candidate” and that his case is not about an ideological issue but about spaces. Therefore, he said, he will start disputing votes to arrive in a second place.

The plenary session of the CNE must know a request for correction requested by Social Justice on the resolution that authorized them to hold primary elections.