Amendments to the constitution are debated 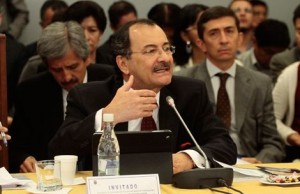 The Occasional Commission of the National Assembly, which analyzes the 16 amendments to the Constitution debated yesterday.

Carlos Polit, General Comptroller of the State, said the changes to the Constitution are not feasible, since competences will be subtracted to the control management of public spending.

Polit added that the work of the Comptroller is of technical aspect and aims to improve the management of public resources. “We need to see where and how public resources are spent,” he said.

He noted that the entity needs to perform audits to the entire public activity, and “not only the audit of resources.”

Alexis Mera, in his declarations to EcuadorTV said that the amendment pretends to prevent glosses imposed on workers for failing to meet the goals. The Government and the Assemblymen of Aliaza PAIS argue that the revision of the objectives correspond to the Ministry of Planning and National Development (Senplades for its Spanish acronym).