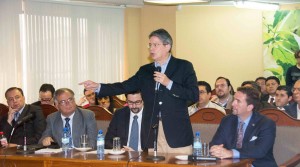 Yesterday took place the discussion at the public hearing of the Constitutional Court (CC), entity that must issue its decision on the proposed amendments to the Constitution, raised by the ruling party Alianza PAIS (AP). 31 people participated at the hearing and presented their arguments for and against the proposed changes.

The President of the Assembly, Gabriela Rivadeneira; along with Assemblyman Virgilio Hernandez and Vice Presidents Marcela Aguiñaga and Rossana Alvarado, explained the proposal of the ruling party.

Rivadeneira said that allowing the military forces to participate in public safety jointly with the National Police “improves the constitutional provision, it expands it without altering the fundamental mission” of each force.

Luis Villacis, MPD Director, César Montúfar, President of Coalition, the Assemblymen of CREO, Mae Montaño and Patricio Donoso, and former presidential candidate of that group, Guillermo Lasso spoke out against the proposed amendments.

Lasso stated his opposition to indefinite reelection and said that, in his view, the changes should be raised in the Constituent Assembly. “We have to go to a Constituent Assembly. It is the people who have to make the decision, 100 assembly members can not do it. No matter how prestigious they are. That’s acting giving the back to the people,” he said.

The Vocal of the Citizen Participation Council, David Rosero, also insisted that the amendments should not be this way. “Clearly, the draft provides the restriction of rights and guarantees enshrined in the Constitution;” so he added it should be addressed in a referendum.