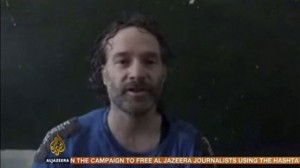 The American reporter Peter Theo Curtis, who was kidnapped two years ago by Syrian militias linked to Al Qaeda, was handed over on Sunday by peacekeepers of the UN after an operation in which Qatar mediated, confirmed sources from the United States and UN.

“We all feel relieved and grateful to know that Theo Curtis is coming back after spending so long in the grip of the Nusra Jabhat”, said John Kerry, Secretary of State, in a statement.

Curtis was kidnapped in October 2012, when planning to enter Syria from the Turkish city of Antaquia. The catarí Tv Station Al Jazeera said that the Qatari authorities brokered his release.

“The Curtis family is deeply grateful to the governments of the United States and Qatar and the many people, public and private, who helped to negotiate the release of our son, brother and cousin”, said the Curtis Family in a statement retransmitted by the White House, which also noted that a ransom would not have been paid for his release.

The office of the General Secretary of the UN, Ban Ki-moon said that Curtis was delivered in the village of Al Rafid in Quneitra at 18:40 “After undergoing a medical examination, Curtis was given to representatives of his government”, concluded the UN.