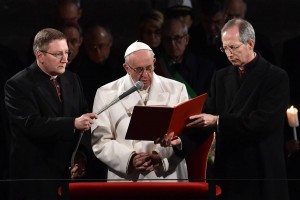 Pope Francis arrived this Friday at the Colosseum in Rome to preside over the traditional Via Crucis which commemorates Christ´s way to Calvary before the crucifixion and that will be dedicated to the the refugee drama in Europe.

This year, the suggestive tour around the Roman monument is held in a particular climate, marked by heavy security measures taken since the November attacks in Paris and maintained after the Tuesday attacks in Brussels that killed 31 people.

At each station of the Viacrucis a specific issue that concerns the world will be addressed, while the cross will be carried by Catholic faithful of many nationalities, including Latin Americans from Paraguay, Ecuador, Bolivia and Mexico, countries the pope visited in 2015.