An Ecuadorian was the campaign advisor of Mauricio Macri 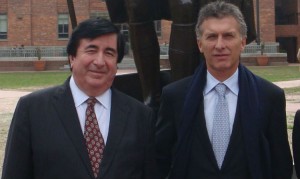 Jaime Duran Barba, the Ecuadorian advisor who just skyrocketed his price on the market with the success of his Argentine client Mauricio Macri, who just won the Argentine presidential elections, was the one who was able to design the new Macri.

According to the Spanish daily El País, “the candidate put everything on his side. He changed, as friends say.”

During his work, Duran Barba fully exploited the most popular facet of the candidate: he was president of Boca Juniors, the most important soccer club in Argentina along with River Plate. He proved it during an election day, by announcing to reporters that he was going to play soccer to relax.

In Ecuador, between 1998 and 2000, Jaime Duran Barba was secretary of Public Administration in the government of Jamil Mahuad.