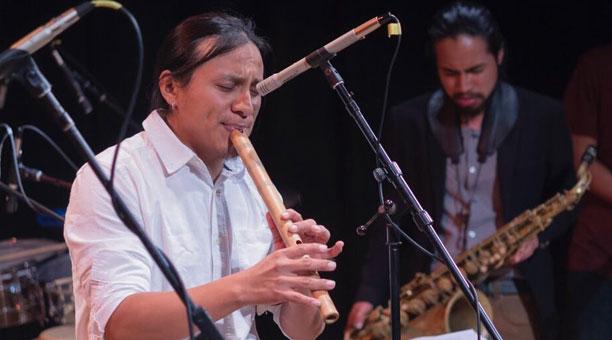 The Runa Jazz project was born just over a year ago, when Curi Cachimuel began his formal studies in music at the San Francisco de Quito University (USFQ). He invited professors and students of the College of Music to accompany him to interpret his compositions in which the Andean cultural diversity is interwoven with traditional Latin American rhythms and with jazz.

This proposal is presented today, at 22:00, at the Ernesto Albán Variety Theater (Plaza del Teatro, on the streets of Manabí and Guayaquil), as part of the Ecuador Jazz 2018. Cachimuel, the leader of Runa Jazz, comes from a family of nine brothers and two sisters who have dedicated themselves to music and dance since they were children.

The support of his father José Manuel, who was leader of the Monserrat community, outside of Otavalo, and of his mother Rosa Elena Amaguaña was fundamental in the formation of this family of musicians. Curi Inti, which means Golden Sun in Kichwa, also studied at the Luis Ulpiano de la Torre School, a Cotacachi institution that provides musical training. His older brothers formed the Yawar Wauki group 26 years ago and with music they traveled through Latin America, North America and Europe. Curi’s desire to join his brothers motivated him to migrate with them to the United States, at age 17. So he started playing in festivals, fairs, concerts and in the streets.

The group of the Cachimuel brothers changed their name, because foreigners found it difficult to pronounce Yawar Wauki (Blood Brothers), according to Curi. They accepted the name Yarina for their band, which means memories in Kichwa. For 17 years, Curi gained experience in different instruments in a self-taught way, but decided to turn his career around to the academic world.

“I need to share the music that I am doing and for that I must speak the same language as the other musicians,” reflects the Otavaleño artist. Curi is studying drums, an instrument that he already knew in the musical projects he has undertaken with his brothers.

However, he is passionate about winds, like quenas, and that is what he has the most knowledge about. At the University he met musicians who complement the Runa Jazz proposal. One of the first to join was Ochoa, on percussions. In addition, eight other musicians are part of this proposal: Luigi Bolaños (drums), Nicolás Cruz (piano), Juan Villarreal (guitar), Carlos Quilumba (sax), Nayri Cachimuel (trombone), Álex Paza (bandolín), Juan Tapia (base) and Curi (winds). Runa Jazz presents today (January 31, 2018) a concert, as part of the Ecuador Jazz 2018 program.

This event will feature guest musicians. The trombonist Alexei Chontasi and the singers María Trinidad and Alexandra Cabanilla will take the stage with Runa Jazz.

This dozen musicians from various cultures (Kichwa, Afro-descendant and mestizo) of Ecuador will play, in the Ernesto Albán Varieties Theater, melodies with three aspects: Andean, Afro and contemporary music. In the Andean region, the instruments such as quenas, bandolinas and voices will star.

The rhythmic part will be in charge of Afro-Emerald and Afro-Brazilian rhythms. There is also a strong influence of Afro-Cuban music, according to Ochoa. The harmonic part comes from the western influence, with the drummer. Jazz will be present in the structure and in the improvisation that this genre allows, both in the voice and in the instruments.

From 22:00, attendees can enjoy a tour of Latin American rhythms such as saya, samba, bossa, etc. This was announced by Mauricio Ochoa, professor of percussion at the USFQ. (I)

Secretary of communication: if any collaborator or adviser decided to act with little ethics when buying followers for Lenin Moreno, he did it without knowledge or authorization