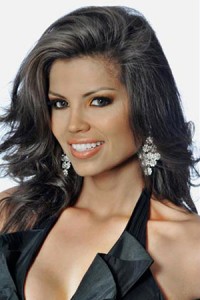 Andrea Suarez—who was born in Loja, Ecuador—traveled yesterday to Chengdu (China) in order to attend the 2010 Miss International Pageant, where she will represent Ecuador on November 7th.

Andrea will wear cocktail and night outfits designed by Tatiana Torres and Carlos Aguilar, who also designed her typical dress (chola cuencana). Andrea’s feet will also be dressed for the occasion, she will model Denisse Benitez designed shoes.

The Ecuadorian will have candidate rivals from many countries, such as: Canada, Thailand, Germany, Colombia, United States, Chile, among others.  The girls will participate in the 2010 Expo Shangai, as well as in an international press conference. They also have scheduled in their agenda a visit to Panda Base and other activities.

At the moment Ana Gabriela Espinoza (Mexican) owns the crown. Suarez has been preparing for two months for this pageant; she has worked on her makeup, runway, culture and physical skills.

“Pray for me. I’m proudly going to represent Ecuador so that the world realizes our country has intelligent and beautiful women who aren’t just a pretty face; but also seek to unify people,” said the Ecuadorian aspirant before leaving the country. She also mentioned that people can show their support by voting for her in the pageant’s web page www.miss-international.org