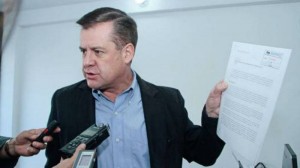 In an interview with Fernando del Rincón, at the “Conclusions” TV space ofCNN in Spanish, Andres Paez, CREO Assemblyman, assured that the visit of Pope Francis to Ecuador generated a change in Ecuadorian society by losing the “fear” and keep “taking to the streets to protest.”

In the interview he said that as an opponent to the regime he did not attend any Mass celebrated by the pontiff to avoid confrontations and misunderstandings that create commotion. “People boo Correa anyway, even if I´m not there,” he said.

Del Rincon asked him if he was a person of bad faith, to which he replied he does not consider himself a bad person, but “Correa thinks that everyone who differ with him are bad people. Those who flatter him and kneel at his feet they are in good. the trouble is that he thinks he is the supreme being to determine who are good or bad people, that is unacceptable.”

More than 100 Ecuadorians live in Athens, according to the consulate