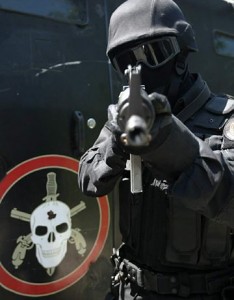 Today, five alleged drug dealers perished during crossfire and another five were arrested in the anti-narcotics operative performed in Rio de Janeiro, Brazil. The operative was made against the drug deals in Jacarezinho, one of the biggest favelas of Rio.

The police performed the operation with almost 150 member of an Especial Operations Battalion (BOPE) of the militarized police of Rio de Janeiro. One of the agents was wounded in the leg amidst the shootout. With the help of armored vehicles and two mechanical cranes the officers destroyed the barricades that hindered their advance.

The authorities of the State of Rio began the anti-narcotics operative since 2008; its purpose is to pacify the city and the neighborhoods controlled by the drug dealers. The operative is scheduled to finish before the World Cup of 2014 or the Olympic games of 2016. In the last five days the death toll due to the hostilities is of 43 victims.