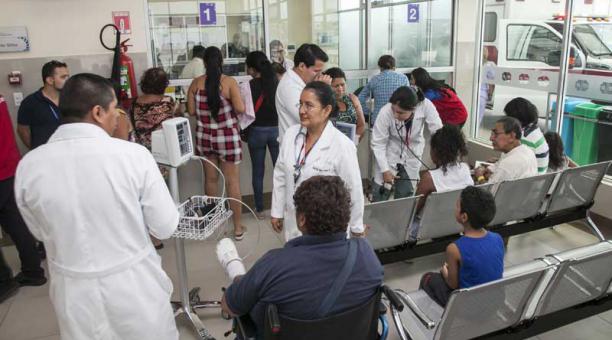 In the Alianza País government program, health proposals are included in the chapter ‘Social Revolution.’ The advances in infrastructure and international accreditation of public hospitals, achieved in 10 years, are emphasized.
The government party also focuses on the promotion of prevention programs (61% of the care is currently curative). And it aims to strengthen the family and community medicine system, in addition to creating oversight committees. The plan mentions the consolidation of the Public Health Integral Network, by integrating the Health Ministry and the social security services. And it talks about boosting the production of drugs and the use of generics.
Most of the offers are aimed at children and adolescents. A year ago, President Correa called his anti-malnutrition policies “one of the biggest failures.” According to figures that mentioned 752 243 children assisted and registered in the system, 20.8% have chronic malnutrition. The plan gives significant weight to sports and recreation.
On its side, Creo-SUMA seeks to “re-engineer the health system.” It recognizes that in recent years there was a significant expenditure, and it also mentions gratuity, which increased the demand for services (from 20.3 million medical consultations in 2007 to 42.5 million in 2015).

“In many places, children are the most affected. In very few occasions the quality assistance demanded at that moment is given, and these health centers only work eight hours daily, reason why the people go to the hospital.” The opposition party criticizes child malnutrition and its levels of morbidity. It plans to equip more than 3,000 clinics, centers and sub-centers, build 200 more centers, reduce waiting times in primary care by 50% and reward the effort of doctors.

A holiday against corruption