Araujo Has No Hard Feelings Towards Correa 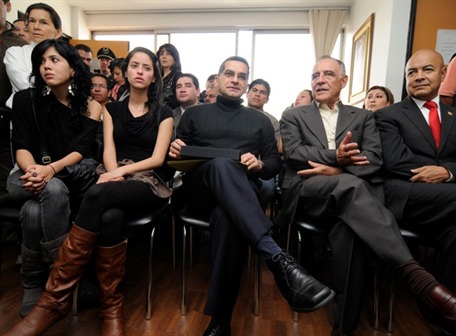 Araujo Has No Hard Feelings Towards Correa

After nearly six months in prison for allegedly inciting the police in September 30 incidents (30-S), retired Army Maj. Fidel Araujo, was acquitted. He stills remains in the Provisional Detention Centre (PDC) waiting for his release ballot to come.

“The first thing I’ll do when leaving this place is to meet my family again,” confessed Araujo who along with his mother, ex wife and daughter, confirmed her status as a political prisoner of conscience of the regime. “It was a struggle between David and Goliath” and at the end the truth prevailed.

He says he has no grudges against Rafael Correa and that consciousness is the one that will not enable President Correa to remain calm, “he blamed an innocent man,” he stresses.

Dominique, his daughter, recalls that when she saw her father on television being accused, the first thing she did was to ask him if that was true. “He told me he was innocent and that’s why I fought with him.”

During the adjudication hearing, his ex-wife, Soraya, accepted that they were prepared for the worst and when they heard that the court declared innocent Araujo they could not believe it. “It was a corrupt process and full of vices, we were ready to go before international bodies, to demand his freedom. There was never evidence against them and even then was imprisoned six months. “She says she felt the weight of power over their shoulders”.

However, Araujo learned an important lesson from all this: he values more to his family and the few friends who were always with him. “The real trouble was for them,” he stresses.

Araujo’s family does not discard to set a prosecution to the State for the damage caused. And while “Hell is over,” Soraya and Martha, Araujo’s mother, no money can restore the lost time and distress experienced. “They needed someone to blame to justify the coup de etat,” said Martha.

A Royal App Was Launched Today