Argentina is paralyzed by general strike against the government 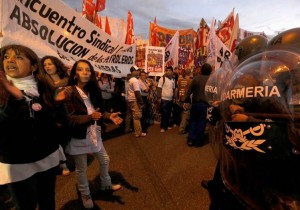 This Thursday, Argentina dawned paralyzed by a general strike called to protest against a 32% of inflation, minimum wage increases and cuts in subventions to gas and water rates.

buses, trains, subways and airplanes did no operate. There were even few taxis for fear to pickets.

In addition, the parties of the Trotskyist left, which are gaining popularity among voters and within the unions, mounted all over Argentina around 50 pickets on highways, roads and streets to prevent the circulation of vehicles.

The strike was complied early in the morning and the streets remained almost empty all day. The military police attempted to evict a picket on the main highway access to Buenos Aires, the Panamerican, and several protesters ended injured and arrested.

The strike occurs in the negotiating process of wage increases with various unions and the government of Cristina Fernandez de Kirchner.