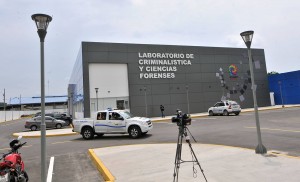 The four forensic investigators from Argentina, designated to solve the case of the two murdered tourists, María José Coni and Marina Menegazzo, organized yesterday many diligences in the Guayaquil Forensic Lab.

In this facility, located in the avenues Rodríguez Bonín and Barcelona, at the southeast part of the city, the corpses of the two girls are maintained. The victims’ families refuse to withdraw the bodies, cause they are afraid to damage the current investigation. (I)