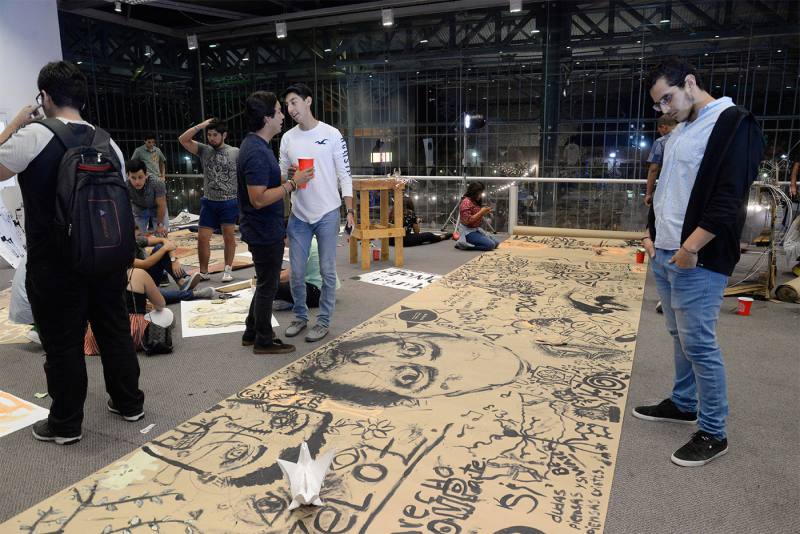 The sound of La Madre Tirana, the smell of pizza, burgers and beer invaded the atmosphere of the festival that put the musical, visual, applied and culinary arts in a cocktail shaker, and served a mix where they all converged harmoniously and amusingly the Funka Fest, which celebrated its third edition this 2018.

Last Saturday, at the Palacio de Cristal, this artistic meeting was held and presented to the international bands Café Tacvba and The Drums, as well as performing arts on the main stage, from its opening until 6:00 pm, a segment in which They presented works such as Mucho Lote, A Man Kicked to Death, Guacho, among others.

Attendees also appreciated the offer in visual arts that were housed in the two floors of the glass structure. The entrance to the pictorial works was available from its opening until 22:30. “Last year I came and I think that although this time is only one day, I think it does not lack anything,” said Jeffrey Véliz, 20 years old.

In addition, gastronomic and applied arts ventures were open to the public. As for gastronomy, in each proposal there were innovative options for the Guayaquil palate, such as Nalu Poké, Tai-Suki Taiyaki, Tiki Fusions, among others.

In the case of Nalu Poké it is Hawaiian food. Poke bowls are a dish with a base of white rice with proteins, which in the case of salmon and tuna can be raw, combined with a variety of vegetables, crunchy elements such as chifles or baked corn tortillas and various sauces.

In the case of Tai-Suki Taiyaki, they offered two Japanese snacks, the Takoyakis, which are dough made with chicken bottom, ginger, octopus, soy, takoyaki sauce, Japanese mayonnaise and nori seaweed; and the Taiyaki are baked dough with different fillings such as apple, nutella or meat.

The musical arts were in two stages: the main one and another brand activation, with the performance of Los Corrientes, Cometa Sucre, Exquisite Corpse, among others. On the main stage they sang The Drums and Café Tacvba, who closed the event with a message: “This is a good time to become aware and to walk as a civil society and more than as a society as humanity and ask for our water, our land, by our air and realize that our lifestyle is contaminated and we are hurting our environment and without it we are absolutely nothing, “said his vocalist, Rubén Albarrán. (E)