BREAKING NEWS
President Guillermo Lasso had his first bilateral meeting with Mexico
Court revokes the nullity in a process against Abdalá Bucaram and others; a judge was suspended
Vice President of the World Bank highlights the level of vaccination in Ecuador
US experts train Ecuadorian public-private team and the Exporter Route is reactivated
Ecuador will have seven participations this Friday, July 23 in the Tokyo 2020 Olympic Games
RansomEXX virus is responsible for the cyberattack on CNT
Imported lentil covers domestic demand in Ecuador and serves as supply to export semi-processed and processed products
New massacre in prisons exceeds the death toll of 2020 and, in response, the president changes the director of SNAI and decrees an emergency
Ecuador receives a new million doses donated from the United States
An Ecuadorian company would have financed the operation that ended in the assassination in Haiti with $ 865,000

Request asylum or shelter. Those are the alternatives that the Assembly members of Correism have for more than a week and have been at the Mexican Embassy in Quito. 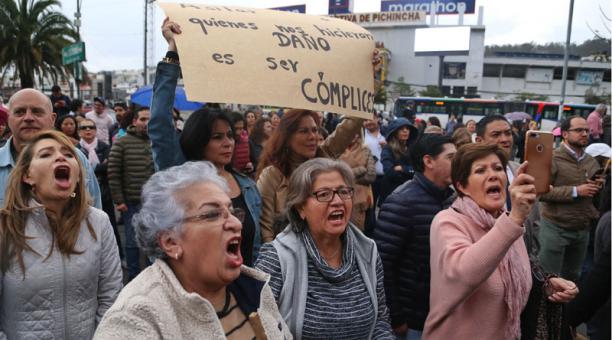 The coordinator of the Citizen Revolution block, Juan Cristóbal Lloret, said on Monday, October 21, 2019 that his co-assistants Gabriela Rivadeneira, Soledad Buendía and Carlos Viteri Gualinga are still “evaluating” what steps to follow.

They are joined by Luis Fernando Molina, alternate of Mónica Alemán, also of correísmo. “In the next few days they will announce what their status or condition is, in some cases they could request asylum.

That is what is being evaluated and will be released in a timely manner, ”said Lloret. In any case, the Ministry of Foreign Affairs (or Foreign Ministry) of the Aztec country has different guidelines to meet these types of orders since 2016.

“When granting asylum, the country of origin must be informed immediately,” said regulation.

And that has not been reported so far the Ecuadorian Foreign Ministry.

Mexican regulations add that, although there is no universal procedure for granting asylum, it is a discretionary power of the State.

He states that this must be based on “political crimes or common crimes for political purposes.”

The authorities of the Ecuadorian Government, although they point to correísmo to promote a failed coup attempt, have not filed charges against any of the legislators who are in the Embassy.

Nor has justice provided proceedings against parliamentarians.

The guidelines of the Mexican Foreign Ministry in relation to the refuge indicate that “once the application for recognition has been submitted, no information can be provided to the country of origin”.

The motivations to access this protection include political opinions, internal conflicts or belonging to a certain social group, among others.

However, he points out that in order to apply “the individual must necessarily be in the territory of the State that would have to recognize refugee status”.

The last pronouncement made by the Mexican Foreign Ministry in this regard was last October 15. In a statement, it indicated that it gives “protection and protection” to a total of seven people in its Embassy.

He added that Leonidas Moreno was presented before this diplomatic representation, as legal advisor to Luis Fernando Molina, but that he “did not request protection or protection.”

The case of the assembly members is unprecedented in Ecuador, but it could be equated with the situation experienced in February 2012 by the editor of the newspaper El Universo, Carlos Pérez, who was assassinated at the Embassy of Panama in Quito after ratifying a conviction for insulting the former president Rafael Correa.

Panama then requested a safe-conduct from the Correa Government in favor of Pérez, but the then Foreign Minister, Ricardo Patiño, objected.

Rivadeneira, Buendía and Viteri principalized their alternates to attend the Plenary.