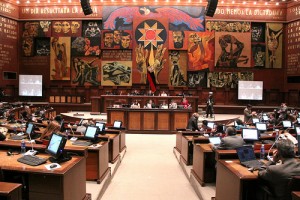 Ecuadorian Assembly members get paid for transportation and housing.

The member of the Council on Legislative Administration (CAL for its Spanish acronym), Carlos Bergmann (AP) reported that the president of the Assembly, Gabriela Rivadeneira, sent a letter to the Ministry of Labour to reform or issue a scope of  agreement 236 in which the allowances for travel and residence for all public officials are reduced from October 1st.

The ministerial agreement indicates that the highest hierarchical level officials who move from their places of residence to a different city will be given three air tickets round trip per month.

This was treated. Labour Minister Carlos Marx Carrasco said yesterday that he sent a scope to respect the number of air tickets granted to the assembly members. “The four passages will continue to be granted. There was a problem, we had posed 100 kilometers for residence, and there happens to be an internal rule that says 60 km. 60 km will be respected.”

On the reduction from three to two basic unified salaries by the concept of residence, Bergmann said it could stay as stipulated by the Ministry in this reform of the Regulations for Payment of Compensation for Residence and Transportation to Officials and Servants of the Institutions, Agencies and State Enterprises, signed by Carrasco, on the 12th of October.

The ministerial agreement lowers the financial compensation for housing costs from $ 1,020 (three basic wages in the private sector) to $ 708.

Bergmann ruled that the CAL will take some other resolution on administrative information of staff reduction or expenses, since the Council even learned about the proforma for next year.

Ecuadorian businessmen analyze impact of the project on inheritance