Assembly spent on cars, events and communication campaigns in the last year 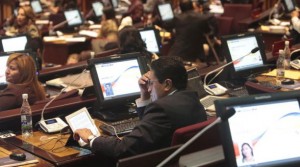 The purchase of five new Toyota vehicles for $ 250,000, the organization of the Asia Pacific Forum for $ 700,000, the hiring of a television space for $ 299,000 and the hiring of an image campaign for $ 450,000; listed as some of the contracts with high amounts between February 2014 and February 2015 the Assembly made, according to the institutional website.

According to the argument of the former head of the Transport Unit, Oswaldo Villalba, the reason to renew the cars was that the existent had not the necessary guarantees (including security, potency and mobility). The award resolution was given in July 2014.

For the Asia Pacific Forum, which convened 17 foreign delegations, the Assembly awarded in December 2014 the planning, organization, coordination, development and logistics services for $ 706,912 to Satré Communication, and the hiring of television space to disseminate the agreements for $ 299,115 to Publi Point CA.

Among the communication campaigns are the image positioning of the Assembly for $ 450,000 that was awarded by invitation to Garwich SA, in October 2014, and the hiring of television diffusion of another campaign of civil right about the initiative to introduce bills by $ 119,990 with Cool Brand Advertising SA.

Regarding the state budget this year, Assemblyman Diego Salgado (CREO) indicated that salary reductions “does not sympathize” with the purchase of “luxury cars” and that sort of things should also be considered when reducing costs.

Meanwhile, the second vice president of the Assembly, Marcela Aguinaga (AP), mentioned in her Twitter account that “additional savings policies that can be implemented besides the salary adjustment” will be reviewed.