Assemblymembers will not be able to modify approved text of amendments, according to CC Judge 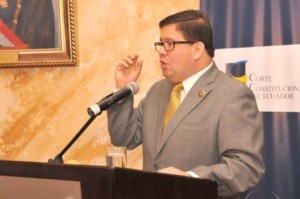 Assemblymembers of Alianza PAIS (AP) will not be able modify the texts of the 16 amendments that were rated by the Constitutional Court (CC), warned one of the Judges of that organism, Antonio Gagliardo, alluding to certain assertions of Assemblymembers from the ruling partyon a possibility of reforming the texts.

The warning, at the discretion of Gagliardo, is part of the constitutional control that will make the CC to the process and the procedure legislators apply, in the approval of the 16 proposals related to issues such as indefinite reelection, management of the Comptroller, amongothers.

Although he preferred not to advance criteria to avoid later claims, Gagliardo explained that the procedure of the amendment, approved by the CC must be respected, considering it is binding.