Assemblymen of the ruling returned to the Legislative 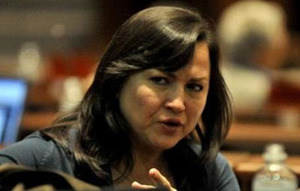 Last Wednesday, November 27, the Assemblywoman of Alianza PAIS, Gina Godoy returned to the Assembly after she was punished with one-month suspension and legislative silence. She said that there are no divisions in the movement relationship because she is disciplined.

After her return, Godoy maintained that there are no political conditions to continue the abortion debate into the fold of the group in the legislative period (2013-2017).

“I have not give up my fight, but measuring the political times the issue differs from me. It would be foolish to insist knowing that the proposal is negative,” Godoy said in an interview with Radio FM Mundo.

Finally, Godoy revealed that her support for the motion of Paola Pabon against the criminalization of abortion, which was the reason for his punishment, was due to a personal feeling that it should not interfere in the political line of the ruling.

Godoy returned to the Assembly with her regime partners, along with Paola Pabon and Soledad Buendia, who also were fined last October 29 for not respecting political agreements.