“With deep sorrow I inform that they have found three (more) dead bodies following the disaster in Huehuetlán and now the number of deaths is seven,” said the governor of Puebla, Rafael Moreno, after a tour around that area.

The last three victims, two children and a pregnant woman were found in a river near the town of Huehuetlán El Grande (of four thousand and five hundred inhabitants). In total, three women and four children have died.

Although Gov. Moreno said there are no more reports of missing persons, rescue efforts are maintained as the village hosts a pilgrimage and non-residents might be among the victims.

According to Civil Defence personnel, the storm that fell last Wednesday night brought heavy streams of water, which reached over one meter high on several canyons. Personal of civil protection and of the emergency medical system moved to the site this morning to undertake the rescue operations, authorities said. 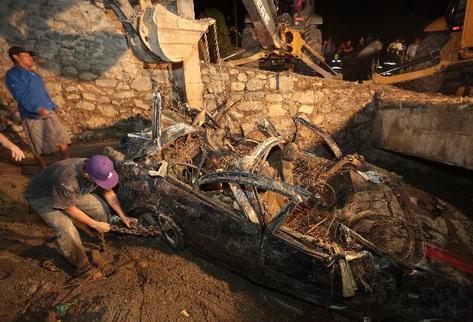 The avalanche also dragged half a dozen vehicles.