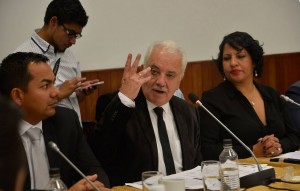 In his appearance before the Oversight Committee of the Assembly, prosecutor Galo Chiriboga said that two reports from the Comptroller´s office with evidence of criminal liability on administrative management of the National Intelligence Secretariat (Senain) have arrived, but these correspond to previous administrations and do not have any connection with alleged cyber espionage.

Chiriboga did not specify the subjects of the audit nor what former officials would be identified. Although reports of three special examinations on hiring, strategic plans and advisors appear on the website of the Comptroller. All these have observations.

The authority ratified that last Tuesday he ordered an inquiry into the telephone tapping system, to know how many operations were conducted since it was implemented, who were the judges who gave the order and for which cases.

Finally, he stated that if it is determined in this investigation that there were wiretaps outside the framework of the law, those responsible will be held accountable to justice.

Deposits of the Ecuadorian bank have fallen so far this year