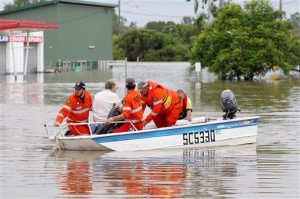 The floods in Australia are causing catastrophic effects on the west States of Queensland and New South Wales, a land of a million of square kilometres. The meteorological department state that the heavy rains will continue affecting the cities, especially Rockhampton and Saint George, which have turned into islands.

Over 200 thousand of people have lost their homes, many crops have been ruined, and 4,000 civilians were evacuated. Meanwhile the helicopters and army planes are distributing medicines and food for those affected. “It is a catastrophe without precedents,” added the Prime Minister of Queensland, Anna Bligh.

The economical damage rises to 5 million of dollars; however, this number is going to grow in the next days. The coalmines have ceased their activities, and the price of their product has steeped. The floods are heading to the south and it is expected that they affect the Northeast of New South Wale. Meanwhile the Minister of Agriculture of Australia, Joe Ludwig promised the federal government to help small industries of primary products, and families that are without homes.

Experts from other regions of Australia and New Zealand have moved to Queensland to help the authorities with their work. The Department of Emergency Prevention of Queensland sates that the heavy rains would continue until March. This is the phenomenon of La Niña, which cools the Pacific Ocean currents and increases the intensity of the rains.