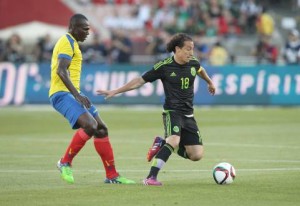 With a goal of ‘Chicharito’ Hernandez in the 14th minute, the Mexican team won the game. (Source: EFE).

Javier ‘Chicharito’ Hernandez scored the goal that gave the victory to the Aztec team in a tight match against the Ecuadorian team at the Memorial Coliseum of Los Angeles (California, USA).

Both teams are preparing for their participation in the Copa America in Chile (Ecuador) and the Concacaf Gold Cup (Mexico), tournaments that will be held in July.

The winning goal was scored in the 14th minute, after ‘Chicharito’ Hernandez defeated the goalkeeper Alexander Dominguez. The Ecuadorian team, led by Argentine-Bolivian coach Quinteros, made a change at minutes 43, when Angel Mena was replaced by Montero.