Azuay peasants marched against mining and in favour of agricultural production 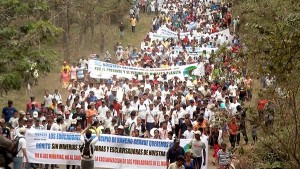 Yesterday, the Girón-Pasaje road was full of peasants from various parts of Azuay. They walked more than eight kilometres with flags and posters in a protest against mining and in favour of agricultural production. The objective was to resist change.

“With the Constitution in favour of the environment and water guardians, but a justice that punishes its defenders, the only alternative is to resist the extractive interests,” said Carlos Perez Guartambel, who joined the march with his fellows of the water projects from the Victoria del Portete village.

In addition, supportive signatures were collected that day to defend life, water and the fighting against transnationals andthe national mining company. These signatures will be delivered to the President of the Republic. In their ideological positions they condemn the criminalization of social struggle and stand in solidarity with the people of Sarayacu, Molleturo,Intag and Victoria del Portete.