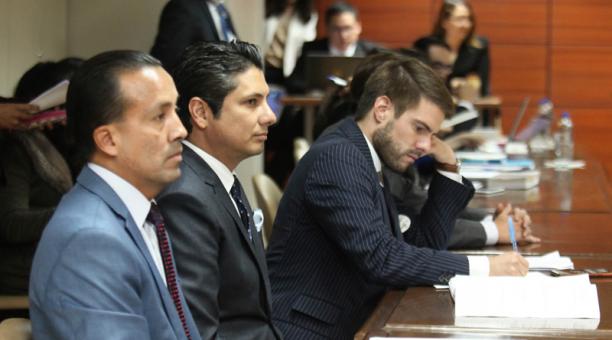 The investigation into the kidnapping of ex-legislator Fernando Balda throws new data. After explaining that three police officers participated in this criminal act, the Attorney General, Paúl Pérez, stated in the National Court that it is a State crime.

During his presentation, Pérez pointed out that the police officers involved belonged to the Secretariat of Intelligence (Senain) and responded to the Directorate of Intelligence, which in 2012 was handled by Fausto Tamayo, who is now convicted in the case of police passes. “In this case, a crime was committed using resources and State officials,” he said.

After the diligence, the Prosecutor was asked: Why do you define this case as a State crime? He replied that “it was a crime that has been committed from the State, because they (Tamayo and Pablo Romero) in their capacity as public officials acted and ordered that the commission of the crime of plagiarism be carried out.”

In addition, he was consulted. Are there checks for payments? “Indeed, there is information not only of checks, but there are offices,” responded the Attorney General. Balda hopes that the investigators include in the process also the “great intellectual authors” and referred to the former president Rafael Correa.

Pérez assured that, if the necessary elements exist, he will proceed with the connection of the former president. On Monday, May 28, the Prosecutor asked the National Electoral Council (CNE) for certified copies of credentials or minutes proving that Rafael Correa was president of the Republic for two terms. He also requested that the Secretariat of the Presidency of the Republic and the Ministry of the Interior send the Executive Decree with which José Serrano was appointed as Minister of that Portfolio.

For now, justice linked Tamayo and Romero to this court case and ordered that they be captured. Tamayo is already in jail paying a sentence for another crime, while Romero is at large. That is why Interpol was asked to locate it and stop it. Perez said that through migratory movements it was possible to determine Romero’s departure in 2017, but not his return to the country.

According to Tamayo’s version, one of the three agents arrested presented him with a report on the actions carried out in Colombia. And it was indicated that those operations would have been ordered by Pablo Romero, with a budget assigned by the Senain. Tamayo is related to the case, because in addition from the bank account of the Directorate of Intelligence two checks of USD 10 000 and USD 11 280, in favor of one of the police officers processed.

The Office of the Prosecutor does not rule out that those amounts were used for the illegal operation ordered against Balda. Pérez added that there are relevant documents from the Senain that are qualified as reserved, but that the Prosecutor’s Office has already requested that they be released and expects that to happen in the coming days.

Prosecutor presented 17 elements to link the two former officials as authors of the crimes of illicit association and plagiarism. Balda’s lawyers, the defense of Tamayo, a public defender who represented Romero and the defense of one of the detained policemen were present in the courtroom.

After the presentation of the prosecutor, Patricio Abad, Tamayo’s lawyer, said that during the process will prove his innocence and stressed that the defendant is already serving a sentence for police passes, so there would be no need to order preventive detention against him.

While Germán Jordán, Romero’s public defender, stated that he has not been able to establish any contact with his client, for which reason he requested that the judge resolve the precautionary measures against him as the Law says. For his part, José Moreno, attorney for one of the agents prosecuted, asked the judge to arrange for the family of his defendant to enter the protection program for victims and witnesses. This happens after yesterday at dawn, two men had entered the house of their client, with the intention of allegedly intimidating the wife of a captured prisoner. Judge Daniela Camacho asked the Attorney General’s Office to protect all persons related to the process and who could present some level of risk. (I)