The Johns Hopkins Hospital in Baltimore became a scene of death when a man learned the condition of his mother from a doctor. The subject collapsed emotionally that as he waited in the hallway he pulled out a gun from his pants and shot the doctor on the stomach.

Audrey Huang, a spokeswoman of the medical center, said that at 11:15 a.m. a faculty physician was shot by an unknown man in the patient area of the thoracic center section in the Nelson building. Afterwards all the main hospital areas were locked down to avoid any danger, while several employees manage to clear the building. Huang also stated that the doctor is expected to survive.

Baltimore police Detective Kevin Brown said that the assailant had locked himself alone but is not yet in custody. Brown also identified the doctor as David B. Cohen, a 45-year-old orthopedic and spinal surgeon that has been working on Hopkins’ staff for more than twelve years. The Detective said that the doctor had already been taken to surgery and that his colleagues hope for the best.

That Thursday police officers flooded the 52-acre campus of the internationally renowned medical facility. The gunman had barricaded himself inside her mother’s hospital room on the eight floor of the Nelson Building. However the negotiations didn’t go as the police had planned. 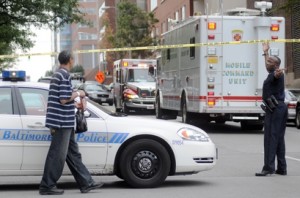 Commissioner Frederick H. Bealefeld III of the Baltimore police said to the news on the afternoon that they are treating this event as a murder-suicide case. The suspect was identified as Warren Davis, 50, and his mother was Jean Davis, 84. There is no official report as to what was the paralyzing condition of Ms. Davis. Bealefeld stated that Mr. Davis received the news outside her mother’s doorway on room 873. During the conversation he pulled out a small semi automatic handgun and shot the doctor at close quarters, the bullet lodged on his upper abdomen.

Over the next couple of hours police called a tactical operation hoping to capture the gunman without violence. Sadly at 1:30 p.m. the special weapons team managed to get close to the room only to see that Mr. Davis was dying from a gunshot wound, and her mother was also unresponsive in her bed.

The Johns Hopkins Hospital is one of the nation’s leading medical research institutions that draws patients from the whole nation. Some foreign countries that need specialized or experimental treatment attend this medical center.

The hospital has over 1,000 beds and 1,700 doctors and treats more than half million of patients every year. However the day of the Davis homicide many patients were evacuated from the Nelson building and the police blocked several surrounding streets because employees fled in despair.

At Least 21 People Die in Train Accident in India