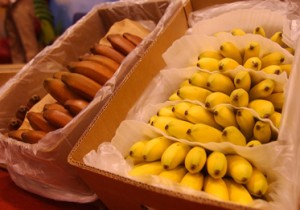 The banana crate price must be set this week according to the current Banana Law. However, producers and exporters still do not have a date for the board meeting, known as Consult Council, which is the one in charge of setting the price for the fruit.

William Ramon, member of the negotiation for the Guayas province, pointed out that they are waiting for a meeting this week to set a price for 2011; otherwise it would be like those occasions that a month goes by and the country continues to sell the fruit at the same price. This generates loses for producers and exporters.

Ramon stated that to avoid that the Ministry of Agriculture set the banana price, as the Banana Bill demands that would take effect when the Official Registration Code of Production be set. Today a meeting with the exporters would be made to set the price to be presented on a negotiation board.

The proposal from producers is to set a price between $ 5,60 and $ 5,85. Meanwhile, Eduardo Ledesma, the executive director for the Ecuadorian Banana Exporters Association (Asociacion de Exportadores de Banano del Ecuador – AEBE) pointed out the importace of looking a price that benefits both parts, and that can be respected the whole year.

“We cannot allow that in the high season the fruit is paid with a price above the official price ($ 5,40) which affects the producers and exporters with whom we got signed contracts since the beginning of the year”, added Ledesma.

In Ecuador there exist 12 thousand banana producers, six thousand of them are illegals, and only 140 exporting companies operate on the country.

The New Barbie May Be Used by Pedophiles