That supermarkets and international customers, especially Europeans and Americans, pay less for bananas is a problem that banana exporters and producers in Ecuador and throughout the region have had to deal with. 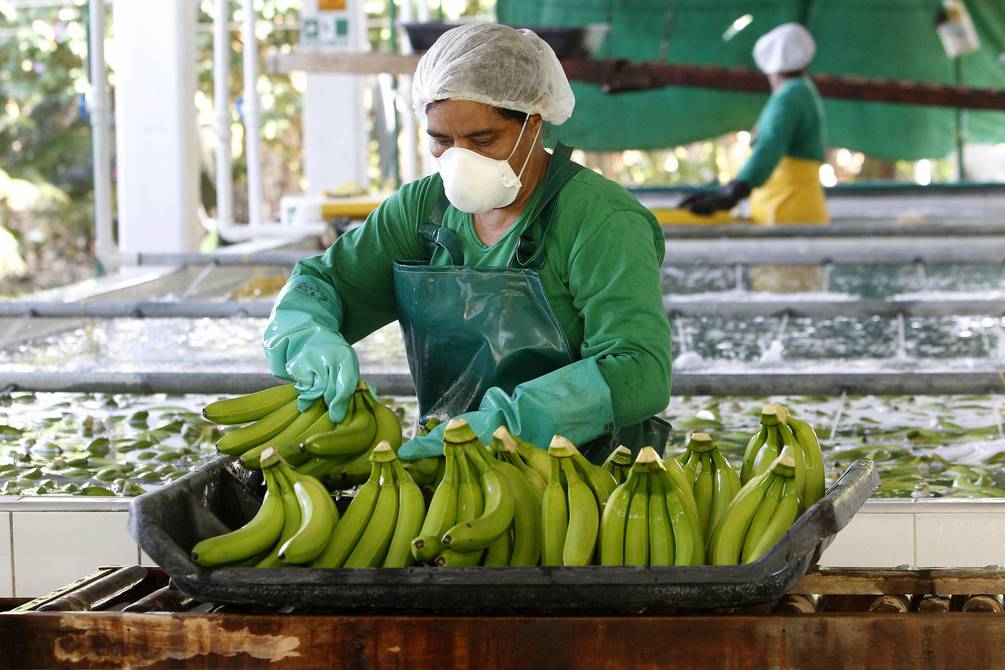 Ecuador is one of the largest producers and exporters of bananas in the world.

In Ecuador, the current minimum price is $6.25 per box for export and increases in production costs: packaging materials, fertilizers, freight, shipping companies and costs generated by growing social environmental demands and climate change, COVID-19 and new diseases such as Fusarium R4T have added pressure to the production process since 2021.

This year the military conflict between Russia and Ukraine was added, which so far, from January to July, only Ecuador has meant a loss of almost 4 million boxes of bananas to those destinations and in all markets a drop of 7.15%, with a reduction of 16.13 million boxes, compared to the same period in 2021.

For José Antonio Hidalgo, executive director of the Association of Banana Exporters of Ecuador (AEBE), the problem of payments in supermarkets and international clients worsened this year. He explains that it is due to a policy where bananas, as they are produced 52 weeks a year, and are part of the basic basket in European countries, are taken as an anchor, pushing low prices to attract consumers to buy other fruits, especially seasonal such as: apples, pears, avocados, mangoes, etc.

This causes a unification of the price of bananas, always below expectations, to which is added that between 2019 and 2021, there has been a greater supply of bananas than demand.

The price of bananas depends on each supermarket and according to the latest data from the European Commission, the wholesale average per kilogram of fruit from Latin America is $1.08, a value that is two cents per kilo below the 2021, to the current date.

The situation pushed banana producers and exporters from Ecuador, Colombia, Guatemala, Honduras, Panama, the Dominican Republic and Costa Rica to sign a Regional Agreement for Shared Responsibility on October 27, 2021, in Guayaquil, through which they requested European, British and American supermarkets to review the prices of a box of bananas in accordance with the international reality of increasing global costs and the demands to achieve sustainability.

The United States is the fifth destination for Ecuadorian fruit worldwide. From January to July, that country decreased its import level of Ecuadorian fruit by -16.85%, that is, 4.09 million boxes less, according to AEBE figures.

But this month a new announcement from the old continent renews the expectations of the regional banana sector of at least achieving better prices for its fruit.

This, after Aldi – a major German discount supermarket chain with a presence in Europe and the United States – announced a new purchasing approach arguing that they are aware that all stakeholders in the supply chain (including retailers) have a vital role to play in creating a banana sector that is socially, economically and environmentally sustainable.

The chain, which is present in nine European countries with more than 70 independent regional platforms, pointed out that they are implementing more responsible purchasing practices and further increasing the transparency of production costs.

“This improvement in our purchasing process means that critical cost changes and cost fluctuations that affect all supply chain stakeholders can be addressed much better together (for example packaging, fuel or logistics),” he reported. the German firm on its website.

Aldi explained that it regularly collects the production costs of Fairtrade certified banana producers, a seal that means that producers and companies have met strict social, economic and environmental criteria; and would take them into account as part of its pricing process.

Meanwhile, Hidalgo revealed, the average of Ecuadorian banana exports that have come out from 2019 to July of this year with Fairtrade certification is only 0.94% of the total.

Recent figures show that from January to July, only 871,760 boxes of the fruit, out of a total of 208,139,540 boxes that were exported to all destinations, had the seal. In 2021, 3,844,146 boxes of bananas out of 379,535,439 were exported with this certification. The head of AEBE acknowledges that the figures represent only a niche but assures that the importance of Aldi’s announcement does not lie in the Fairtrade certification, but specifically in the methodology.

“What we are doing is that the Fairtrade methodology is taken as a reference, not the label itself. What Fairtrade does is an analysis of costs in each of the countries and according to that analysis technically sets (the price) according to the impact that each of the countries has had and the conditions of competitiveness that exist (…) and gives you an additional award for your sustainability, which is also analyzed technically”, explained the executive president of Aebe

For his part, Richard Salazar, executive director of the Banana Marketing and Export Association (Acorbanec), recalls that producers and exporters met with several clients, including Aldi, at the Fruit Logistica fair, last April in Berlin, to ask them to apply shared responsibility.

He adds that they respect the policies of discount supermarkets and the strategies to attract their customers but warns that these businesses must understand that they cannot continue to pay less for the fruit because they not only put Latin American bananas at risk; but also, to European production itself and to fruit in general from European producers.

“In August we had a visit to Ecuador by Franca Rodríguez, on behalf of Aldi Sud, in which she told us about this measure, which we celebrate, and we aspire and hope that other supermarkets follow this line because we want to understand that they have listened to us and that We have created awareness that the sustainability of banana production and exports was at risk, including supplying Europe and other markets, if we continue with these policies that have been in place,” says Salazar.

For Danilo Palacios, CEO of Corporación Palmar, with the announcement of Aldi, the possibilities of reaching a fair price through shared responsibility increase. He indicates that Aldi has the capacity to allocate resources to achieve real changes in consumer perception of the quality of Ecuadorian bananas and the effort involved in making it sustainable.

“Aldi’s new approach is to have first-hand information from the exporter and products on the complexities and needs of the business, which allows us to ensure a stable and progressive volume over the years and establish a fair price to cover investments. what we need to do to meet everyone’s expectations,” explains the businessman in a post on the Aldi page.

Meanwhile, Hidalgo, who also describes Aldi’s announcement as positive, indicates that they will wait for it to materialize and be implemented for the benefit of the entire banana value chain, not only with Aldi but with other supermarkets, especially in the European Union.

“Let’s hope they don’t go beyond good intentions. What must be highlighted is that the message comes from Aldi is positive, since this chain is part of the top five with the largest number of stores in that geographical area, but we will have to wait what they say (other chains such as) Lidl, Edeka, Metro, Rewe, whose commercial strategies also have an impact in that area,” says the leader, who anticipates that in the next Banana Consultative Council, in which the price of the fruit will be set for 2023, a price should be managed that do not reduce the country’s competitiveness against its competitors. “We cannot come out with a price that is much higher than nearby producing countries such as Colombia, Costa Rica, because that will distance us from the main markets. I know that we can become competitive and that must be the immediate objective”.

Immigration amnesty: Venezuelans will be able to get an Ecuadorian visa and ID