For the fourth consecutive day, banana producers have closed roads in the province of El Oro, one of the main producers of the fruit along with Guayas and Los Ríos. 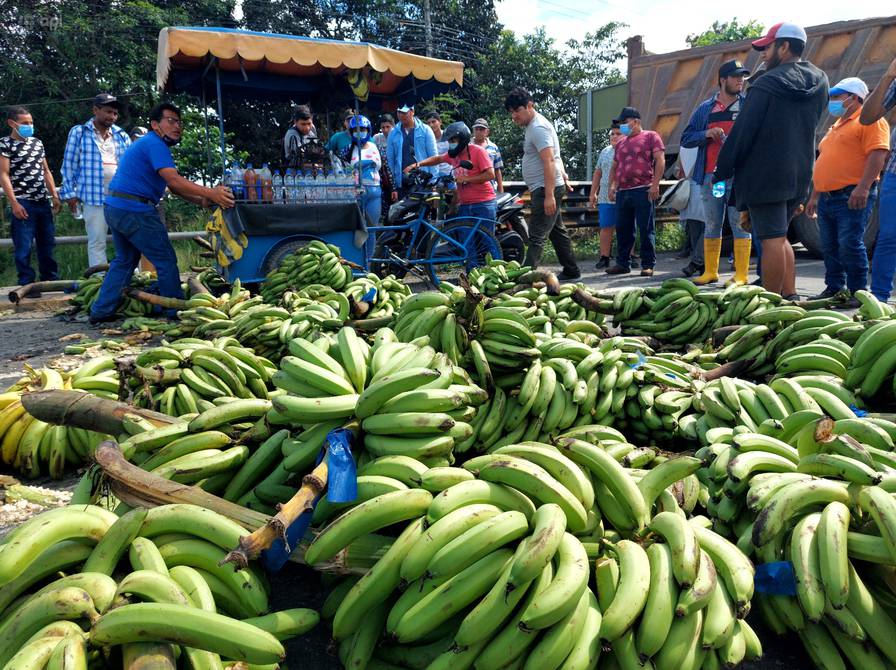 Last Monday, banana producers closed the entrance road to El Triunfo to call the attention of the Government so that it adopts immediate actions to alleviate the crisis in the sector.

The voices of protest and claim for the crisis that the sector is going through due to the fruit that has stopped being exported to the markets of Russia and Ukraine, due to the war, since March 24; and the complaints about the disrespect of the minimum support price for a box of bananas, which is $6.25; was radicalized this Thursday with the rejection by the Federation of Banana Producers of Ecuador (Fenabe) of an alleged agreement between producers and the Minister of Agriculture and Livestock, Pedro Álava, to end the strike in the sector.

According to the union, in the last week they lost around $16 million and 50,000 jobs have been destroyed by the crisis.

From the Association of Banana Exporters of Ecuador (AEBE) it was reported that -in the first six weeks of the conflict between Russia and Ukraine- Ecuador has stopped receiving $30.84 million , a reduction of 37.32% compared to 2021.

Likewise, Fenabe rejected the participation of the Assemblywoman for El Oro Johanna Moreira in obtaining a commitment document to seal said agreement, said Segundo Solano, president of the Orense Banana Association (ABO) and spokesperson for Fenabe.

In a statement, published on the night of Wednesday, April 13, the union denied that there are agreements with the authorities and assured that the measures continue; and they also rejected the intervention of the legislator indicating that “she tries to cover up the ineffectiveness of Minister Pedro Álava, one day before his appearance at the National Assembly.” Álava had planned to attend the plenary session of the Legislative this Thursday, April 14.

However, according to Solano, the signing of the alleged agreement led to the suspension of the participation of a delegate from the banana producers, harming the sector.

“Fenabe is also expressing its disagreement and its rejection of those who have taken the name of Ecuador’s banana producers by signing an act without any type of authorization,” he said.

“What is most outrageous about this situation is that the Minister of Agriculture had to appear before the plenary session of the National Assembly, where the banana producing sector had to participate and proceed to ask why so much laziness, why the incapacity and why not has executed the sanctions corresponding to those who have disrespected the law in our country,” said the leader, who added: “The minister is going to appear, but the participation of the delegate from the banana sector has been suspended because supposedly there is an agreement, there is a record compromise between banana producers and the minister”.

In addition, the leader indicated this Thursday, in a press conference, that the alleged agreement with the minister does not even include the proposals that Fenabe has made public in recent weeks, such as the purchase of 2 million banana bunches from producers. through a contingency fund financed by them.

“We do not want a paternalistic government, we want to finance that purchase of bananas ourselves with the discount of 5 cents for each box of bananas.”

He assured that the sector is maintained to the extent in fact and there is a great possibility that the provinces of Guayas and Los Ríos, where roads were also blocked last Monday, will rejoin the protests this Thursday.

This possibility, in the case of Guayas, was addressed on Wednesday in a meeting held by representatives of Fenabe with the governor of Guayas, Pablo Arosemena. Mireya Carrera, spokeswoman for the union, at the meeting explained that Arosemena told her that he would not allow the closure of roads and disrespect for the law.

To which Carrera replied: “If the closure of roads is not allowed, which is a crime, and is typified in the Law, but it is also a crime to harm the banana sector by disrespecting the minimum support price.”

In this regard, Franklin Torres, president of Fenabe , revealed that around noon this Thursday, the union bases were going to hold a meeting to outline the actions, among which the reincorporation of Guayas and Los Ríos to unemployment and closure of tracks.

“Yes, we are all going to unite,” said Torres.

Meanwhile, regarding the participation of Assemblywoman Moreira, Solano said: “My appreciation and consideration for Assemblywoman Johanna Moreira, but Johanna should not have signed, she is also part of the commission as a producer, in this case there are producers and assembly members and We have not given that representativeness to her, rather that document and that commitment harms us because a space has been lost in the National Assembly for a farmer to go and ask the minister for concrete answers,” he said.

For his part, Álava announced this Thursday, through a video on his Twitter account, more controls to enforce the minimum support price of bananas, although he did not refer to the supposed agreement signed with the producers.

The minister indicated that the Ministry of Government was requested to carry out control operations through the police departments, articulated with the MAG to comply with the Law to Stimulate and Control the Production and Marketing of Bananas, Plantains (Barraganete) and others. Musaceae related for export.

“And if this is the case, generate the respective complaints that correspond within the framework of the law,” Álava warned, adding that he also asked the Central Bank to send the pertinent information on the transactions carried out in the interbank payment system, from the Current and savings accounts of the exporters to the bank accounts of the producer or marketer in fiscal year 2022, to verify that the amounts paid are correct.

In addition, it required the National Customs Service of Ecuador (Senae) to provide the corresponding information on the shipment of the fruit and the export in the period 2022, to carry out the crossing of information that validates the respect of the official payment.

Meanwhile, from the export sector, Richard Salazar, executive director and administrator of the Association of Marketing and Exportation of Bananas of Ecuador (Acorbanec) , rejected the accusations of the producing sector about the disrespect of the price of the box of bananas, pointing out that the export sector depends on international buyers.

“We invite them to directly export their fruit, we are willing to help them in this management, even giving them buyers to avoid intermediaries, and these leaders try to sell the fruit at the official price in the different markets, and feel directly the realities of the market ”, said the leader, who asked the MAG to grant the export permit to these producers.

However, despite the differences with the producers, Salazar indicated that the proposal on the creation of the contingency fund between private parties and contributing $0.05 for each box of bananas is a valid option; as long as it is voluntary and managed by the private sector.(I)