The five main destinations for shipments of fruit during this year have been the European Union, Russia, the United States, Argentina and Turkey.

The main destination of the Ecuadorian product was the European Union, with a 35% participation; followed by Russia with 24%; and third, the United States with 18%. Eduardo Ledesma, president of the Association of Banana Exporters of Ecuador (AEBE) estimates that this year will close with the export of some 325 million boxes. According to the Ecuadorian Banana Regional Corporation (Agroban), between 300 and 315 million were sold last year. Despite the growth of the sector, Ledesma said that the fruit trade has multiple problems such as current regulations and procedures that slow down the development of the activity.

The competitiveness of the product has also been slowed down in markets such as the United States. Ledesma explained that this loss occurred because the costs of Mexican and Guatemalan bananas are lower than those of the Ecuadorian, however he hopes to recover this niche.

In this sense, one of the measures that producers and exporters have taken to make the Ecuadorian fruit more competitive was to reduce $ 0.06 to the minimum support price of the 43-pound box that is now $ 6.26. 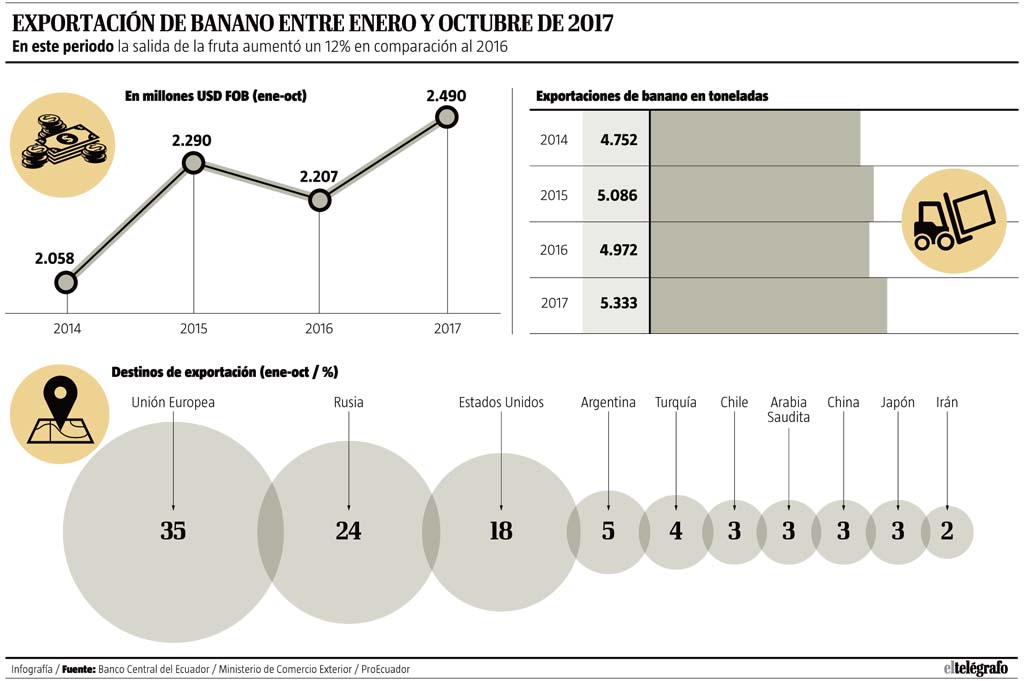 The new price, $ 6.20, will apply from January 1, 2018. After this decision, Ledesma now expects the Ecuadorian authorities to also encourage banana production, “without impeding development.” He cited as an example, the management of Yilport in the terminal of Puerto Bolívar, whose concession is currently under review by the authorities of the country.

Ledesma reiterated that the tariffs in said terminal ‘are exaggerated and affect the competitiveness of the orense production, which represents 27% (of the national production.’ “More than 100 million boxes could be affected, and 500,000 people would be unemployed. Directly and indirectly,” said the businessman, another point that makes the sector less competitive, according to Richard Salazar, executive director of the Banana Marketing and Export

Association (Acorbanec), is the general regulations in force. 20 years ago and “is no longer adjusted to reality,” said Salazar and recalled that his reform was a request to the Productive and Tax Advisory Council and is analyzed within the Food Sovereignty Committee of the National Assembly. “On the one hand we won with the agreements, but the internal measures (including the tariffs of Puerto Bolívar) leave us out of the market. “Salazar added that another important issue to review is the single tax payment. “For our way of seeing, it is excessively high. It represents around 40% of Income Tax (IR). We demand that it be reviewed immediately, “he said.

Achievements of the sector in 2017 and prospects for 2018 Despite the difficulties of the sector, Eduardo Ledesma recognizes the latest actions of the Ministry of Foreign Trade as the opening of the Brazilian market and the efforts for Japan to reduce tariffs. On the side of ProEcuador’s management, 47 commercial opportunities for products from the banana sector have been generated. The opening to the Panama market was also achieved; the non-increase of the official price of the banana box to $ 7.00; and the increase of exports of about 150% to South Korea. Manuel Romero, Agroban executive director, explained that since 2015 the sector has had a sustained growth in export volumes to different destinations.

The offer of Ecuador to the world covers a little more than 50 countries, but for Romero, more than reaching other destinations, it is necessary to look for other marketing schemes. “It’s difficult, but within the chain of marketing and distribution, the idea is to try to reach the consumer directly and cut the links (or intermediaries),” he said. By 2018, the sector expects to obtain lines of credit from the National Financial Corporation (CFN), to formalize contracts between producers and exporters to increase productivity with irrigation equipment, drainage, fertilization and control of Sigatoka black bacteria and other diseases. What would allow to produce 200 boxes per hectare, that is, about 30 million additional boxes per year. “This implies that a cheaper banana can come out and reconquer those markets that we have lost”, concluded Ledesma. (I)