Banco de Fomento Economico, which merges the CFN and BanEcuador, will operate from January 2023

From January 1, 2023, the Banco de Fomento Economico will start operations. For this purpose, the President of the Republic, Guillermo Lasso, signed Executive Decree 406 that gives rise to the new public financial institution that is the result of the merger between the Corporacion Financiera Nacional (CFN) and BanEcuador. 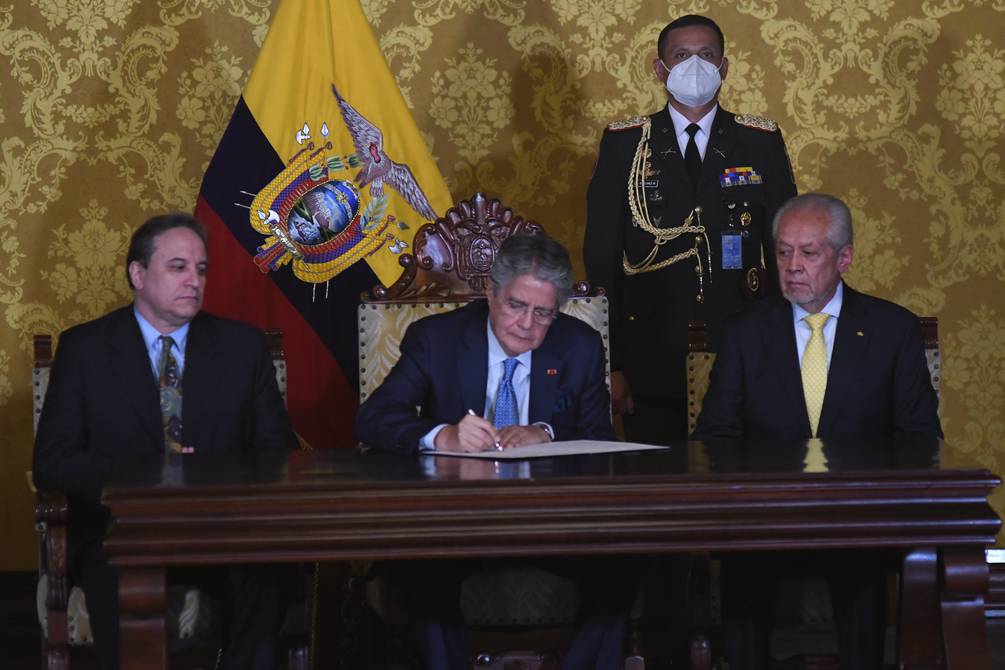 The president of Ecuador, Guillermo Lasso (c), signed the decree of the merger of the CFN and BanEcuador, accompanied by Iván Andrade (d) of BanEcuador-CFN, and Simón Cueva, minister of Economy.

The signing of Decree 406 took place on the afternoon of this Monday, April 25, at the Carondelet Palace, with the presence of Iván Andrade, president of the CFN and BanEcuador boards, and the Minister of Economy and Finance, Simón Cueva.

Andrade stressed that the merger of the CFN with BanEcuador is not about a change of institutional name, but that the objective of the new public bank is the “democratization of credit.” To do this, he said, the focus will be to give greater coverage to those who have had less access to resources to finance their initiatives.

He added that in recent years a small group of 419 companies have benefited from large loans totaling $1.15 billion, which is equivalent to an average of $4 million per company.

On the other hand, the director of the CFN and BanEcuador referred to the trials that are underway to recover the overdue portfolio. “For every tens of millions of dollars we recover from lawsuits we could deliver 100,000 new loans at $10,000 each to the base of the pyramid,” he noted. In addition, he said that with each million dollars saved in operating expenses, 20,000 new credits could be granted for an amount of $5,000 each.

Over the eleven months that the current government has been in office, Andrade indicated that in this time loans have been approved for more than $400 million to 85,000 people. The goal at the end of four years of mandate is to have given loans to 400,000 Ecuadorians.

For his part, President Guillermo Lasso pointed out that the Banco de Fomento Economico will focus on serving especially micro, small and medium-sized companies, “which are the source of income and livelihood for millions of compatriots,” he remarked.

Lasso attacked against the management that the merged institutions have had before his administration. He mentioned that “the CFN credits were not for productive companies, they were loans for friends of the President of the Republic, both (Rafael) Correa and (Lenín) Moreno.”

He assured that there were credits for $100 million granted “to a single person”, which provisions had to be made “to clear the balance”, he said.

“You (Ecuadorians) pay taxes, and those taxes, in the past, have been misused to give credits to the cronies of the former presidents of the Republic,” Lasso insisted. He cited as examples of these alleged irregularities the case of a hotel in Manta that received a credit for $30 million and that has now been seized by the CFN to pressure the recovery of that money. Another case pointed out by the president has to do with the La Clementina farm, which obtained nearly $100 million, whose operation has been declared expired.

Lasso defended that in his government financing has been delivered to more than 16,000 citizens in 90 days, totaling around $60 million.

The creation of the new public bank will allow annual savings of $25 million, he stated. He urged the Superintendence of Banks to carry out the pertinent controls. “No more credits linked to political power, linked to the personal interest of the President of the Republic,” he emphasized.

The president also pointed out that there are around 100 coercive lawsuits in processes for approximately $400 million. In this sense, he commissioned Andrade to recover the resources and carry out investigations to present to the Prosecutor’s Office the possible links that existed between the officials of the time and the subjects who received the loans.

The Banco de Fomento Economico will begin operations with assets valued at $5,000 million, Lasso reported. In addition, it will have $1.8 billion of funds available for loans and will have an equity of $1.6 billion. (I)

Miss World 2021 will do tourism in Ecuador, including Galapagos