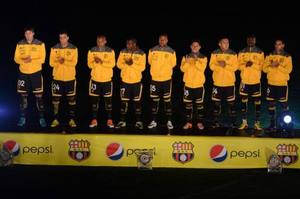 The Monumental stadium brought together more than 70,000 people in the popular Noche Amarilla where Barcelona team presented its new squad for the national tournament in 2014.

Amid the performance of various artists, posthumous tribute was paid to former Barcelona president Galo Roggiero, who died last December. After this, it began the presentation of the yellow team.

Among the new hires, emphasize the presence of the scorers of the tournament 2013, Federico Nieto and Federico Laurito. It also figure Luis Checa, Christian Suarez, Alex Bolaños and the own coach Carlos Ischia.

For the match against César Vallejo of Peru, Barcelona aligned with Lanza, Paredes, Checa, Ordoñez, Nazareno, De la Torre, Luis Caicedo, Flavio Caicedo, Oyola, Penilla and Ayoví. In the complementary phase, Ischia made ​​eight changes and the debut of Nieto, who had a clear scoring option occurred.

The game ended with a draw 0-0 and there were no “surprises” in regard to recruitment of another domestic or foreign reinforcement player.