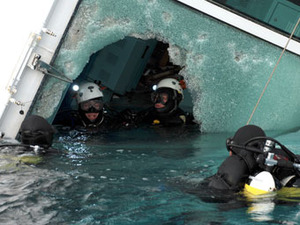 On Thursday, rescue divers found what would be the latest two victims of the shipwreck of the cruise Costa Concordia, which sank last year near the coast of the Italian island of Giglio.

Franco Gabrielli, the head of the civil protection agency, told the media that the remains discovered on Thursday, September 26, were “absolutely consistent” with the two missing persons, an Indian man and an Italian woman. He added that their identities will be confirmed after analyzing their DNA and that the families of these were already notified shortly after the divers discovered the human remains in the morning.

The bodies of the victims were spotted in the sea in the area that the teams called “ship center area 3,” near the place where it was suspected that the two bodies could be missing, after 20 months of the tragedy.

It is expected that the cruise, which was re-floated and straightened on September 16, is removed from the coast of the Mediterranean island in the next spring, and then be disarmed.

Book ‘A concealed tragedy’ is banned by judge of Childhood