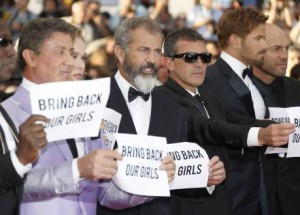 The Islamist group Boko Haram would have given in to the demands of the government of Nigeria and agreed to release 100 of the abducted girls, reports the British newspaper ‘The Telegraph.’

Boko Haram abducted 223 girls a month ago and agreed to deliver them gradually if some of its members are released from prison.

The paper said that the journalist Colin Freeman had contacted with very close sources to the families of the militants, who said that the mediation of an Islamist cleric depends on how the other part responds.

A group of actors from the cast of ‘The Expendables 3’ showed last sunday in Cannnes their support for the girls abducted with the slogan ‘Bring Back Our Girls’ in small posters.