Bonil´s cartoon is awarded in Mexico 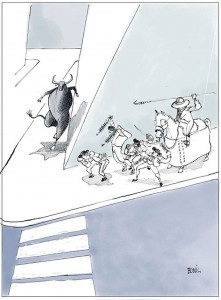 Xavier Bonilla, aka Bonil and cartoonist of daily El Universo won the first place in the second edition of the so-called International Cartoon Contest “Bulls yes, Matadors No,” held in Mexico, for his cartoon the “Ezquina Mezquina” in which a bull hides from a group of matadors who intend to kill him.

His drawing competed with 400 cartoons, reports the Facebook site of this contest, which aims to “abolish the torture in the arenas of Mexico and the world.”

The jury was made up by personalities like cartoonist Rius, artist Francisco Tolero, writer Elena Poniatowska, actress Brigitte Bardot and poet Homero Aridjis.

Shipment of cocaine is found in Crucita