The Minister of Health stressed that the vaccination applied since last May, when the government led by Guillermo Lasso began, “has been extremely effective in preventing deaths and complicated conditions.” 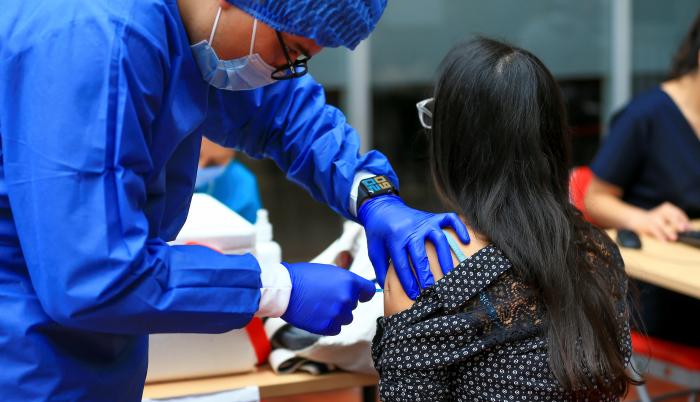 At the moment, the third dose is already applied to the elderly and those with some vulnerability.

“Following that same strategic plan, from January we will be announcing who are the people who should approach the vaccination centers to receive their booster doses, ” she stressed.

According to Garzón, Ecuador will be able to vaccinate 85% of the target population by the end of the year, since as of Tuesday more than 13 million people had been vaccinated with the first dose, which “in itself is an achievement.”

According to the official, the Government has enough vaccines to advance in the inoculation process and between January and February 2022 three million more vaccines will arrive.

If the goal is met, Ecuador will become “one of the first countries in the world to have covered 85% of the population” vaccinated, but this also depends on citizens understanding the importance of being protected, even more so with the proximity of the Christmas and New Year’s Eve parties, she pointed out.

After the five-day holiday, at the beginning of the month there was a rebound in cases and the number of hospitalized patients who required intensive care units increased.

“It was a slight rebound, in fact, infections have increased from an average of 4% of viral positivity that we had sustained for several weeks -which showed us that the pandemic was controlled in the national territory- it rose to 9%, that is it doubled”, she said.

There are thirteen people on waiting lists for hospitalization, intermediate care and intensive care in the network of hospitals of the Ministry of Health, the Ecuadorian Institute of Social Security, the Armed Forces and the Police.

Garzón explained that 85 of the 540 beds assigned by the Ministry for the care of covid patients are occupied, as well as 12 of the 45 beds arranged in intermediate care and 71 of the 150 for intensive care.

According to the minister, at the moment there are coverage problems in the Amazon area: the provinces of Sucumbíos (on the border with Colombia), in Pastaza, in Morona Santiago and Zamora Chinchipe.

“This lack of coverage translates into an increase in cases“, she said, speaking of an outbreak in those areas.

Last Sunday, the Governments of Ecuador and Colombia agreed to reopen their land border starting on December 1 in order to boost commercial activity and bilateral ties, after a year and a half closed due to the Covid-19 pandemic. 19.

“We will hold a bilateral vaccination event on December 1″, said the minister, assuring that they have been working “for a few months” with the Colombian Ministry of Public Health to achieve a “safe reopening of the borders. “

People will be able to pass with the vaccination card that certifies the two doses against covid-19, and those who do not wish to be vaccinated must present a PCR certificate.

As of December 1, vaccination brigades will be developed on both sides of the border, he said, assuring that they have strengthened the plan to determine outbreaks and immediate control to prevent their expansion.