Botafogo is defeated by Independiente José Teran in Libertadores Cup 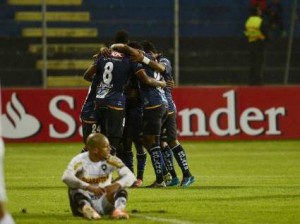 The Independiente Jose Teran team got their first victory in `Libertadores´ Cup last night by beating Botafogo 2-1, keeping effect the chances of qualifying for the next phase of the tournament.

On the first time the Ecuadorian team took control of the game, but they lacked effectiveness, although the team of the coach Pablo Repetto was the first to insinuate danger with the headed goal of Andrés Lamas at minute 5.

In the complement stage, the Brazilian Botafogo had a better beginning, taking advantage of a defensive mismatch in a corner, in order to equalize the game with  a shot from defender Bolivar (58m).

While the encounter progressed, Repetto risked on offense, and at minute 90 with a shot of Sornoza, they could score a 2-1, a result with which they are second in Group 2, prior to the rematch with the Brazilians on March 18 at the Maracana stadium.