Observing a sea turtle swimming between lids of tubs, pieces of cloth and other plastic waste right on the Puerto Ayora dock was the harbinger of the difficult panorama that was seen in the coastal cleaning day that took place on September 18 in Galapagos. 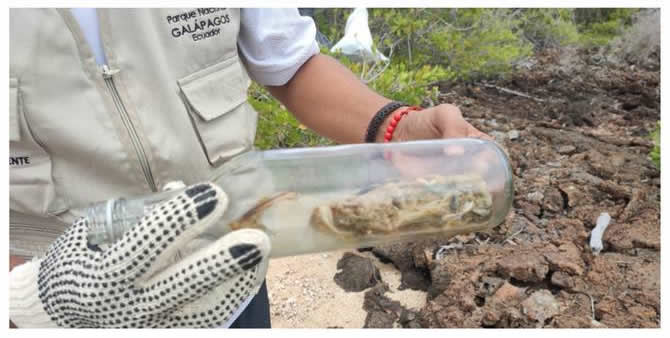 Park rangers and volunteers got up very early to organize cleaning tasks at 21 sites in the archipelago. One of the sectors visited was  Punta Rocafuerte , which is about 40 minutes by boat to the south of Santa Cruz Island.

Accessing the place is complex and an experienced captain is needed to anchor the boat and disembark. At the site the crystalline waters, volcanic rocks and mangroves merge into a unique landscape. However, it was enough to walk 100 meters inside to verify a harsh reality.

Plastic bottles, lids, ropes, sugar sacks, fishing nets, the remains of a chair and even earrings were found scattered around the site mixed with the environment . “We will take the bags, we will put on gloves and classify by material: plastic, glass, metal”, was one of the indications given by one of the park rangers who was on the route.

The impact of garbage on the species of the archipelago is brutal. In less than 20 minutes, the director of the Galapagos National Park, Danny Rueda, found a dead fish inside a glass bottle. The state of decomposition of the animal did not allow knowing which specimen it was. ” Sure he entered the (container) and could not get out, ” he said while showing the bottle. This also happens with small reptiles like lizards.

Meanwhile, a colony of marine iguanas was sunning itself about 5 meters from the pile of garbage bags that the volunteers managed to group. But the danger does not end there. Much of the plastic waste has been “roasted” by the sun and when the volunteers grabbed it it broke apart and became microplastics.

All this garbage has labels from mainland Ecuador, Peru, Argentina, Chile, Colombia or China. “ We want everyone to see firsthand the oceanic garbage that reaches our shores. They are plastic waste that is not generated in Galapagos, but we have the responsibility to collect them because they affect the biodiversity of our archipelago and that of the world, ”says Rueda in an interview with this newspaper.

However, the official is clear and indicates that the solution is not only to collect the waste: “T he productive matrix of the large companies that generate this waste must gradually migrate to materials that are completely biodegradable and reusable. This must be global ”.

In addition, the executive indicates, in the country they have 25% recycled resin in their packaging and are working on a campaign with returnable bottles so that their users can see the economic and environmental benefits of using them.

” It is unacceptable that the packaging ends up in an inappropriate place like our oceans or communities and that is why our commitment to the Coastal Cleaning Program was born and how from the educational side and awareness we can generate a positive impact ,” he says.

The program Palacios is talking about is an integrated work between the Ministry of the Environment, Water and Ecological Transition, the Directorate of the Galapagos National Park, Conservation International (CI) and the Coca-Cola Ecuador Foundation. The initiative expands nationwide.

For Marina Vera, CI representative, the efforts of this plan on the continental coasts of Ecuador help to prevent tons of waste from reaching Galapagos. ” We would like this program to expand so that the garbage from Peru, Costa Rica or Colombia does not reach the islands, ” he says.

The expert says that national, regional and global policies are also needed to solve the great problem of garbage that reaches the archipelago: “Thanks to the management of the Galapagos National Park, nearby sites are well cared for, but in remote areas, where there is no no type of activity and access is difficult, the amount of garbage is enormous ”.

During the 17 years of the Coastal Cleanup Program, 233.8 tons of garbage have been collected in the country. Only between January and May 2021, 9.2 tons of waste were collected in Galapagos. And last September 18, 1.6 tons were collected on the islands. These numbers tell us that the easy-going “use and throw away” mentality must disappear. (I)