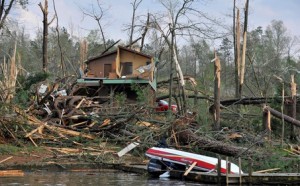 Alabama is the latest country to suffer from a widespread southern storm. Early morning thunderstorms brought tornadoes and powerful winds that snapped trees, cut the power and trapped people in their homes.

Meanwhile in Tuscaloosa, several workers cleared the oaks around the University of Alabama. Emergency crewmembers stated that various homes around Birmingham, and Alabama Power Co. were without electricity.

Several schools closed their doors, and more that 260,000 businesses are without electricity. Forecasters informed that more tornadoes could appear during the rest of the day.