The day was just beginning and former President Abdalá Bucaram was found in his room . Armed policemen raided his house and one of them pointed a rifle at him . 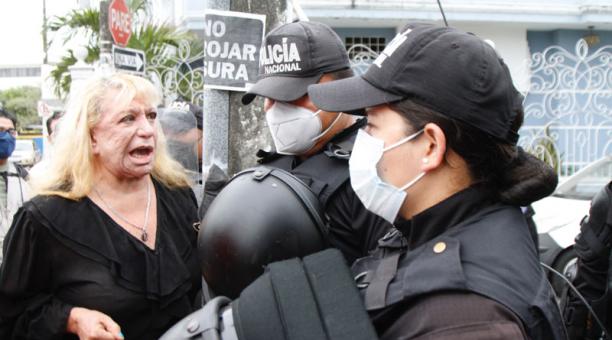 The uniformed man took part in the operation that was mounted to arrest the former head of state.

Wrapped in a blanket, Bucaram got up and raised his hands. Those moments were captured and broadcast on television . It was 06:38.

10 minutes later, the Prosecutor’s Office officially reported the capture and said that he is being investigated for an alleged crime of organized crime.

According to the entity, this process was opened last May and seeks to identify the relationship that Bucaram had with Israeli citizens Shy Dahan and Oren Sheinman, who were attacked in the Penitentiary.

The arrest came a day after Bucaram publicly admitted that he had talks with Dahan, who was killed on Saturday.

For the Minister of Government, María Paula Romo , this process is also related to this crime. “The crime under investigation will be related to the death of an Israeli citizen who was deprived of liberty in the Penitentiary.”

With this new accusation, the former president adds a third judicial process against him. The same goes for his eldest son, Jacobo. He is also singled out in this case and yesterday, August 12, 2020, it was known that a new arrest ticket was issued.

The police have not yet located Jacobo Bucaram , but they say that they have already established a fence for his capture.

Jacobo’s relationship with the Israelis originates when the foreigners, who were prosecuted for using false documents, claimed in the Public Prosecutor’s Office that he gave them USD 400,000 for drugs.

The economic transactions would have been carried out through bank transfers and cash payments .

Today, in this case, three members of the Quito Transit Agency are also prosecuted for organized crime , accused of giving false credentials of the DEA to the Israelis. The Prosecutor’s Office confirmed that one of the officials is detained and will go to a hearing.

In the raids carried out in Quito and Guayaquil , uniforms, documents and cell phones were seized.

The telephones will go to expertises , to collect the information that rests in the memories.

Investigators want to know more details of the relationship between the agents and the Israelis with the Bucaram .

Unlike the other investigations that rest against the former president and his children, this new file will be directed from Quito .

For this reason, yesterday Minister Romo announced that the former head of state would be transferred to the capital for a hearing to formulate charges . It was even known that an airplane was arranged to transport it.

Until the closing of this edition, Bucaram did not leave Guayaquil. He remained in the Abel Gilbert Pontón Hospital , guarded by dozens of police officers from elite groups.

He arrived at that medical home around 10:00. Alfredo Arboleda, his lawyer, reported that his client suffered a pre-infarction.

Until the afternoon, that diagnosis was not confirmed. After the facts were known, Dalo Bucaram, another son of the ex-president, rejected the capture.

“Again they raid my father’s house, mistreat my mother and my underage nephews (…) why this procedure against an older person, with heart problems and a shackle”.

Dalo Bucaram is in Miami, United States, with his wife Gabriela Pazmiño and his brother Michel. The three face charges of an alleged crime of illicit association , for the illegal sale of medicines during the health emergency. Jacobo Bucaram is also immersed in this process .

In that file also appear the statements of the two Israelis attacked.

For this, the Embassy of Israel in Quito ruled and considered “very serious” that a citizen of that country has been murdered inside a prison. Meanwhile, Sheinman , who is still recovering in a hospital, asks the state to guarantee his personal safety. His defense ensures that his life is in danger.