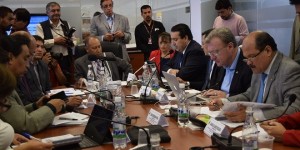 The budgetary assignments submited last friday in the National Assembly, set that the government’s financing needs for 2015 will be of $ 8,806.8 million. The Committee on Economic Conditions of the Assembly would begin to discuss it next week and for Tuesday 11 or Wednesday 12 of November, legislators will convene a committee meeting to prepare the report.

In the 2015 budgetary assignments is indicated that the debt repayment will reach the figure of $ 3,090.6 million and the deficit will reach $ 5,368.8 million. In the Advance Petroleum accounts category, the figure is 0.

Fausto Ortiz, former Minister of Finance of the Government, said that the need for actual funding would reach $ 10,000 million, as the current is underestimated. Last year in the budget implementation, the Ministry of Finance reflected the initial budget with 0 allocated for the oil presale.

The Minister Fausto Herrera told the Reuters news agency in September, about where the government could get financing for next year. The government has worked credit lines with China, India and Russia. In addition to the IDB, CAF, World Bank and European Investment Bank to fund some projects.

Supermarkets must publish prices on their websites