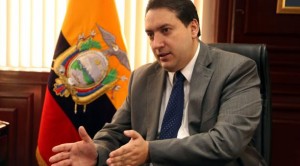 The Finance Minister, Fausto Herrera, sent the budgetary assignments for 2015 to the National Assembly for $ 36 317 million, he said in his Twitter account.

In June the price of the Ecuadorian oil reached its highest point, standing at USD 98.9. But it’s value was falling in recent weeks, and on October 23 was of about USD 75.4.

Prosecutor demands prison for a defendant of Las Dolores case