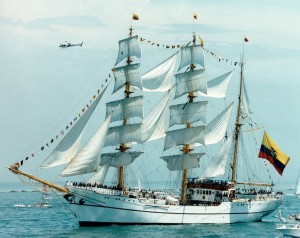 167 midshipmen, officers and crew members who will sail the five seas for more than nine months aboard the Buque Escuela Guayas were bid farewell yesterday. This is the first time that the sailboat will travel around the world in its 36 years of operation.

With nostalgia and emotion relatives were present at the Malecon Simon Bolivar, near the Yacht Club, to say goodbye to the sailors. They will sail for 294 days, 208 of which they will sail seas and oceans to comply with the instruction of future officers, said the captain of the ship Carlos Zumárraga during the farewell ceremony, which was attended by Navy and government authorities.

He added that the 13 officers, 79 crew members, 41 midshipmen and 9 musicians, who will sail over 32 thousand nautical miles, will be the country’s ambassadors in each port they arrive. One of the sails of the ship carries a stamp with the phrase All You Need is Ecuador, the national tourism brand.