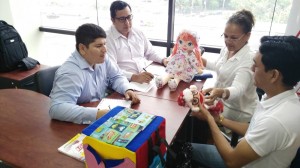 150 suppliers sought to access supermarkerts through a round of negotiations, which lasted about three hours.

Most suppliers, of food, met yesterday in Guayaquil with representatives of supermarket chains as Almacenes Tia, Santa Maria, Favorita Corporation and others.

This is the second round, since the first that took place in November last year, in which a hundred agreements of business engagement were signed, said Juan Carlos Jacome, zonal 8 supervisor of the Superintendency of Control of Market Power (SCPM) .

He explained that a greater presence of domestic products is sought in supermarkets hangers with the compliance of the Good Business Practices Manual for the supermarket sector and suppliers, which took effect last November.

32 rounds are planned nationwide until December, the two closest will take place in Riobamba (Thursday 18) and Cuenca (Monday 22).