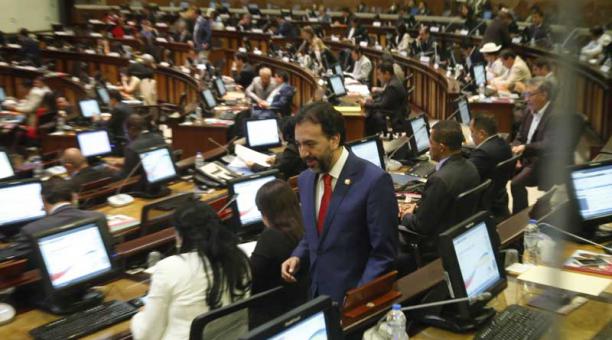 Between the businessmen and the Government there are seven points of disagreement in relation to the economic measures proposed by President Moreno, and the project to Promote Economic Reactivation, which was discussed yesterday (November 20, 2017) in the Plenary of the Assembly.

Although the Legislatives made observations to almost 50% of the document that was presented for the first debate, the businessmen are not satisfied. According to the president of the Economic Regime Commission, Pabel Muñoz, an effort was made to improve the project in order to stimulate the debate, which means that it will not be the final project.

The rise of 3 points to the Income Taxes for large companies, raised in the reform, was one of the points that was most criticized by private unions, although the Regime does not foresee changing it.

Businessmen argue that this measure affects the generation of employment. The suggestion is that the rise should be gradual, said Patricio Alarcón, president of the Federation of Chambers of Ecuador.

Meanwhile small and micro companies, are asking for an extension of the tax exemption period to four years. “Because it is the minimum time needed for a small company to make a profit”, according to Christian Cisneros, director of the Chamber of the Small and Medium Company of Pichincha (Capeipi). The Executive proposed in the project that the tax exemption be applied to the first two years, while the Economic Regime Commission proposed three years.

The third point of dissent is the elimination of the tax in  advance and the return of the minimum tax generated when paying the advance, which the businessmen requested during the dialogues in the Consultative Council, but which was not included in the project of this law.

Last week, President Lenin Moreno announced that the exoneration of the payment of the advance, which will only be for companies that have invoices up to USD 300 000, would be executed by means of an executive decree, but no date has been announced.

The banks are also objecting to the project. The Association of Private Banks (Asobanca) rejects the surcharge on withdrawals in cash and says that more incentives should be considered for electronic media.

Although President Moreno set the exemption from the collection of items such as construction and agriculture; and that in addition the cap for the surcharge rises from USD 4 000 to USD 5 000 per month, Asobanca does not agree with this, because it considers that it is a punishment for the use of cash.

During the previous debates in the Economic Regime Commission, even “Alianza País” assembly members, such as Viviana Bonilla, questioned this surcharge.

Exporters are concerned that the Regime will not return the items by ‘drawback’ and Tax Credit Certificate.

The payment for this debt, according to the Ecuadorian Federation of Exporters (Fedexpor), amounts to USD 120 million. Another point of discrepancy is the collection of the customs control rate, which applies since November 13. This has generated debate, although it is not part of the project that is discussed in the Assembly. Several business chambers interposed, last week, a precautionary measure to avoid charging the fee, but had no effect.

According to Roberto Aspiazu, executive director of the Ecuadorian Business Committee , the problem lies in the differentiation made by Customs to set collection fees, depending on the weight of the product. Employers consider it “discretionary”.

The economic issues that concern the private sector

The private guard of Petroecuador is at issue