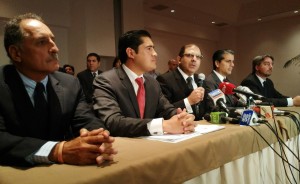 During a press conference, businessmen asked to talk again about 37 points that representatives of the productive sectors discussed with President Rafael Correa in March.

Felipe Ribadeneira, president of the Federation of Exporters (FEDEXPOR), believes that the draft law on inheritance and capital gains distanced businessmen and the government.