Businessmen ask to eliminate the ISD to investments in progress

The possible elimination of the Foreign Exchange Tax encourages the productive sectors that also request to remove the tax on the importation of raw materials and inputs.

The announcement of the Minister of Foreign Trade and Investment, Pablo Campana, about a proposal that will be delivered to the Executive to eliminate Foreign Exchange Tax (ISD) is well received by the business and productive sectors.

Representatives of both segments consider that it is a good step, but that it is not enough to solve the competitiveness problem facing the national industry. If the Campana proposal is made concrete, they point out that suppressing ISD would be a fundamental point in favor of attracting Foreign Direct Investment (FDI).

However, for its effect to have greater impact, they argue that the initiative should include the elimination of the tax for those who currently have investments in Ecuador. The Foreign Currency Exit Tax was created in 2007 after the approval of the Tax Equity Reform Law with a fee of 0.5% and allowed the State a collection of $ 31.4 million. In subsequent years, the rate increased to 5% (current rate). From January to December 2017, it generated $ 1,097.6 million in revenue, according to the Internal Revenue Service (SRI). 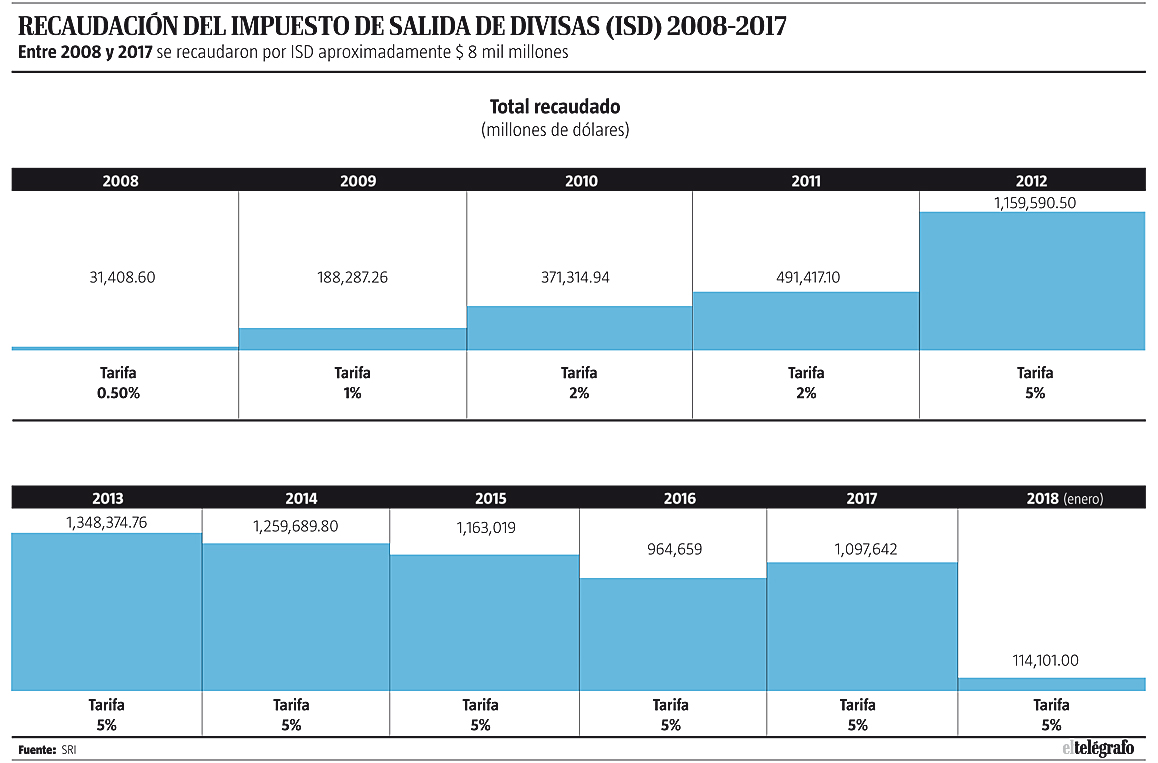 In April 2016, the Law on the Balance of Public Finances set new rules regarding exemptions and refunds. David Molina, executive director of the Chamber of the Ecuadorian Automotive Industry (Cinae), explains that this rule determines that the ISD paid for the import of raw materials, supplies and capital goods that are in a list, can be returned via credit tributary, but the CKD (parts for the assembly of automobiles, manufactured abroad), do pay the tribute, which complicates its productive performance.

“It is positive news in terms of encouraging investments that may come, but it is relevant for investments that have already made a bet in the country.” Javier Díaz, president of the Association of Textile Industrialists of Ecuador (AITE), argues that the Campana initiative would partially solve the obstacles to attract foreign investment.

He agrees with Molina that the elimination should be extended for 8entrepreneurs who have already bet on Ecuador’s productivity. “It reduces our competitiveness because it increases the cost of imports in raw materials, inputs and machinery. It alienates foreign investment because it is an extra cost that the investor has to pay”, emphasizes Díaz.

The former Vice Minister of Foreign Trade, Xavier Orellana, says that it is a wise decision within the policy of attracting foreign capital, increase productivity and encourage the creation of more jobs. In order to prop up the country’s economic growth, Orellana recommends a gradual reduction of the ISD to previous investments.

Between 2008 and 2017, the ISD allowed a collection of $ 8,075 million, undoubtedly a very important amount for the country that “can be covered with more investment, which generates more wealth, more employment, more consumption, and this in turn the payment of VAT and other taxes, apart from promoting productivity, “he explains.

The amount is capped

According to the Law of Balance of Public Finance, when a person leaves the country can carry an amount of up to three basic salaries free of ISD, that is, can get from Ecuador up to $ 1,158.

1 additional basic salary will be exempt from the tax for each minor who leaves the country.

ISD does not pay those who cancel or withdraw from abroad with a credit or debit card up to $ 5,000 per year. (I)