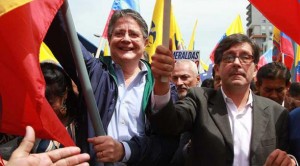 Luis Dionisio Pino Carlier, through a precautionary measure seeks to ban the National Electoral Council (CNE for its Spanish acronym) to deliver to Compromiso Ecuador the forms for collecting signatures, with which they seek to call for a referendum to halt the amendment that would allow indefinite reelection.

By his own rights, the citizen filed a request for precautionary measures before the Judicial Unit of Guayaquil on Tuesday. Pino argues that Guillermo Lasso would have violated the Constitution by resorting to the CNE before the Constitutional Court (CC).

The citizen, who is recognized as a representative of the Rangers of Justice Oversight, argued that Lasso “intends to evade the ruling of the CC” by going directly to the CNE. The document, of three pages, will be analyzed by the Civil Judge, Teresa Quintero.

Compromiso Ecuador, on this, said: “The petition has no legal basis. There is no basis for saying that we do not meet the requirement of the opinion of the Court, when this, itself, decided that the ruling is given after the collection of signatures.”

Pino denied being a member or supporter of Alianza País, however, in his Facebook account, he is recognized as “head of operations at Alianza País.”