CAL will define regulations on speeches in the Assembly 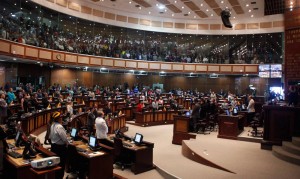 The Council on Legislative Administration (CAL for its Spanish acronym) will be responsible for defining the implementation of the resolution adopted by the assembly on the construction of speeches, the development and dissemination of images in the interventions in the plenary of the Assembly.

Fausto Cayambe, member of Alianza País, said that this body is empowered to make regulations based on the Organic Law of the Legislative Branch (LOFL), and in the discussion of the resolution, it will be defined whether any regulation is reformed or one is specifically made to regulate the “support material” used by the assembly members.

Among the faults of the assembly members established in LOFL are provoking violent incidents in sessions, abuse the assembly members verbally or by deed and express offensive and discriminatory terms or terms that incite hatred in the sessions. The sanctions are written admonition, fines and temporary suspension.

Indigenous route for the strike of August 13